Hillary Clinton Has an Unexpected New Role — on TV 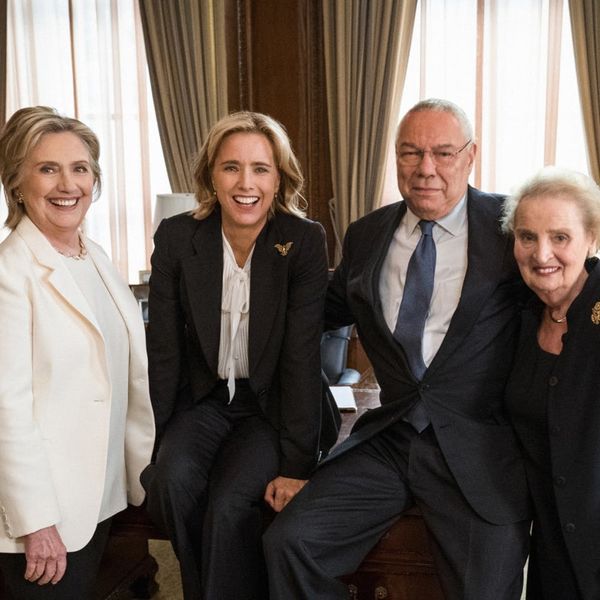 Clinton, Powell, and Albright will appear as themselves on the Sunday, October 7, episode, which was filmed back on July 11, during the season’s first week of production. In the episode, the trio of political powerhouses will advise fictional Secretary of State Elizabeth McCord (Téa Leoni) on a delicate matter.

“We’re delighted to have these three former secretaries of state be part of our season premiere,” series creator and executive producer Barbara Hall told The Hollywood Reporter. “It was a privilege to experience their perspectives and discourse both in and behind the scenes.”

Albright was the first woman to serve as US secretary of state, holding the position under President Bill Clinton from 1997 until 2001. This is actually her second time appearing on Madam Secretary; she previously popped on season 2. She has also played herself on episodes of Parks and Recreation and Gilmore Girls.

Powell took over as secretary of state in 2001, serving under President George W. Bush until 2005. He has one acting gig under his belt — an uncredited cameo on JAG in 1997.

Hillary Clinton became the secretary of state in 2009, under President Barack Obama. Her on-camera roles include a cameo on Broad City in 2016 and an appearance on Saturday Night Live in 2015, when she jokingly confronted Kate McKinnon about the comedian’s impression of her.

Téa Leoni, who has played the role of Elizabeth McCord on Madam Secretary since 2014, spoke about both Clinton and Albright in March 2017, telling Newsday she was “such an admirer” of the former first lady. Of Albright, she said, “We met down in DC and I knew I only had a limited time so I was firing questions at her. And then she came and was on the show [the first time], as Secretary Albright, and it was very interesting because she said, ‘You must stay involved in politics. You must stay involved in politics.'”

Leoni added that Albright made a statement “saying that she loved the show because it made foreign policy less foreign,” which the actress called the show’s “greatest compliment.”

Will you be tuning in to see Hillary Clinton, Colin Powell, and Madeleine Albright on the season 5 premiere of Madam Secretary? Let us know @BritandCo!