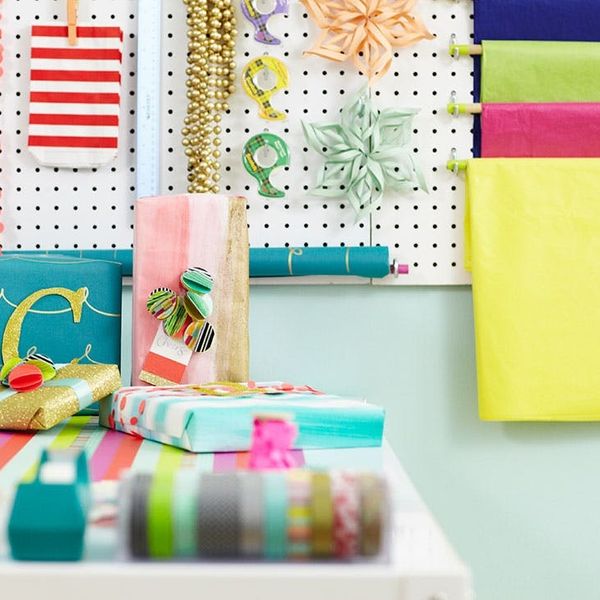 Whether it’s the holidays, wedding season or that one month of the year when everyone you know somehow has a birthday (March over here), it’s great to have some gift wrap tricks up your sleeve. As you can see in the video above, we’ve got a few of our own, and we’re pumped to share them with you as part of our Most Gifted Wrapper contest with Scotch® Brand.

No idea what this contest is? Get all the deets here, but the gist is… Your gift wrap skills could give you the opportunity to win $1,000!

Here’s how it works:
1. Wrap your gifts in the most creative way you can dream up.

2. Take a photo and submit them to MostGiftedWrapper.com.

3. Winners will be announced on December 21st.

You have until December 9th to enter the contest, so start wrapping! (Note: This contest is open only to LEGAL RESIDENTS OF THE U.S. and D.C. (excluding AZ, CO, NE, MD, NJ, ND, TN and VT), who are 18 (19 in AL and 21 in MS) and older. Ends 12/9/15. To enter and for Official Rules (including prize descriptions), visit mostgiftedwrapper.com. Void where prohibited.)

Note: If you use patterned tape, it’s gotta be Scotch® Brand Tape!

Get your creative juices flowing for this wrapping paper by pinning a few of your favorite simple patterns on Pinterest. Get out some scratch paper and try out some designs you want to make on your paper.

Roll out your solid-colored paper, and place something heavy on the ends to keep it from rolling up. Then shake up your gold paint pen and draw your design on your paper. We went with basic swirls, but you could do anything that strikes your fancy. Draw some hearts or some elaborate flowers, or get out your acrylic paint and make thick stripes. When you’re done, make sure to let it dry before you wrap your gift.

Top your newly created paper with a personalized touch – a monogram topper! You could even write on the back to make it a 2-in-1 gift topper and card.

Either cut or purchase a paper letter. We used the Cricut Explorer™ to cut our letters. Then add Scotch Double-sided Tape to the top of the letter. Slice any tape that is hanging over the edges with a Scotch® Utility Knife. Sprinkle your letter with glitter and gently spread it with your finger. Remove any extra glitter.

Scotch® Tape is amazing. You can seriously MacGyver it into so many things. We’ve made necklaces out of Scotch® Washi Tape and vases for fake flowers out of Scotch® Packaging Tape. And now we’re going to make the most adorable Scotch® Brand gift toppers of all time.

First roll out three or four strips of Scotch® Washi or Masking Tape, sticking it to a flat surface. Make sure the strips overlap slightly. Peel it off the surface and flip it over. Then add Scotch® Magic Tape to the back. Now place it into your hole punch and make some circles. Repeat this process with different patterned tape until you have eight circles.

Now it’s time to build your topper. Take a small strip of Scotch® Double-Sided Tape and place it on the back of one circle. Then stick half of another circle to the tape. Fold back the section that is free, add more tape to that back and then add another half of a circle. Repeat this process until you’ve added eight circles. Topper complete!

Make a bunch of these to top a large present or use a single topper for a jewelry box.

Okay, so now we’re going to show you how to wrap a gift!

Take your gift box and place it in the center of your wrapping paper. Fold over the edges making sure you have enough paper to cover it. Cut any excess paper. Fold up one side of the paper and tape it in place using Scotch® Gift Wrap Tape. Then fold over the other side and secure it with tape. Fold in the ends and fasten them with Scotch® Gift Wrap Tape. Then add your toppers and a gift tag using Scotch® Double-sided Tape.

Now go and make yourself a wrapping station. And don’t forget the most important tool: Scotch® Tape!

In what creative ways do you wrap your gifts? Share your thoughts in the comments below. And don’t forget to enter the Most Gifted Wrapper contest to show off your skills (and win $5,000)!

From Your Site Articles
Roxy Taghavian
Roxy has been creating and executing DIY projects since her very first trip to Michael's as a child. If there's a project at hand, she'll figure out how to make it. When she's not wielding her hot glue gun, she can be found at the beach, traveling to far off lands, reading and running at her gym "The Panhandle."
Gift Wrap
Home DIY
Gift Wrap Sponsored Wrapping Paper
More From Home DIY

16 DIY Easter Centerpieces That Will Make the Easter Bunny Jealous