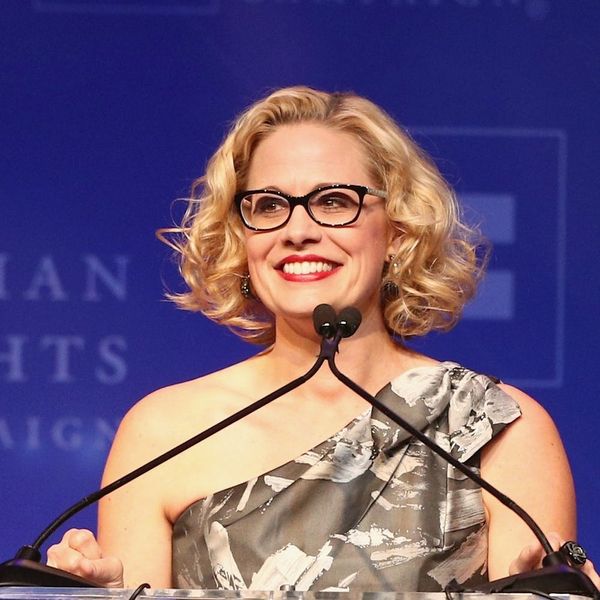 As results continue to roll in one week after last Tuesday’s 2018 midterm elections, Democrats have gained another seat in the Senate — this time for senator-elect Kyrsten Sinema. Sinema’s win adds to the growing (and historic) list of women who will be changing the face of Congress this year.

Sinema is the first new Democratic senator for the state since 1976, and although her win against Air Force veteran and Republican Martha McSally may come as a surprise to some, the former congresswoman employed strategies used by both former Democratic president Barack Obama and the late Republican senator John McCain to secure her victory.

During the 2008 presidential election, then-senator Barack Obama pushed for high voter registration. He understood that in order to get more youth (particularly in racialized or low-income communities) to vote, they needed to be engaged in the electoral process. Sinema used a similar tactic to help engage with Arizona’s oft-neglected Latinx voters. And it paid off with her win.

With approximately 2.1 million Latinx people living in the state, Latinx voters make up nearly one quarter of Arizona’s electoral base. Sinema’s team engaged directly with the community, who have been increasingly disappointed in President Trump’s rhetoric around immigration. Still, the race was tight: The final results gave Sinema a lead of just 1.7 percentage points against McSally, who conceded late Monday night.

But beyond voter registration and engagement, Sinema has worked hard to position herself as an independent-minded leader like Arizona’s former senator John McCain, who died earlier this year from cancer. Sinema pulled from her childhood struggles, including three years spent living in an abandoned gas station, to position herself as an independent thinker who is willing to put country over party.

During the campaign, Sinema very rarely mentioned her political affiliation. Instead, she focused on her triumphant journey from homelessness to a PhD and, ultimately, her career in politics. She also spoke at length about her commitment to health care protections for Arizonans (much like McCain did toward the end of his life), one of the major issues during this year’s midterm campaigns.

Although she started her career as a Green Party activist in state legislature, she pivoted to the Democratic party as she moved to federal politics — a move that’s drawn some ire from more left-leaning progressives. Sinema has been vocal in her dissent against the old guard in the Democratic party, stating during the campaign that she would not support Chuck Schumer as Senate Minority Leader upon her arrival in DC. But it was Sinema’s careful positioning that helped seal the deal for many in the state, including those in and around Tucson, her opponent’s home court — a county Sinema won against the GOP nominee.

“Senator John McCain stood for everything we stand for as Arizonans,” Sinema said during her victory remarks Monday night. “Fighting for what you believe in. Standing up or what’s right, even if you stand alone. And serving a cause greater than oneself.”

“Senator McCain is irreplaceable,” she continued, “but his example will guide our next steps forward. He taught us to always assume the best in others. To seek compromise ahead of division, and to always put country ahead of party.”

Beyond being the first woman to represent Arizona in the Senate, Sinema is also the first openly bisexual member of Congress. “Arizonans went to the polls last Tuesday looking for bold new leadership,” DNC chairman Tom Perez said in a statement to The Guardian. “And that’s exactly what they’re going to get with their first-ever female senator and our nation’s second openly LGBTQ senator.”