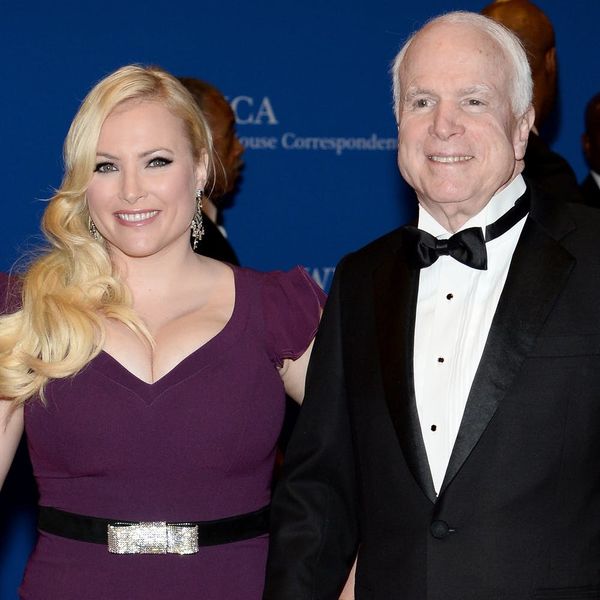 A little more than a year after being diagnosed with an aggressive brain tumor, and just one day after his family revealed his decision to stop receiving cancer treatment, Senator John McCain has died at the age of 81. A lauded Vietnam War veteran (as a Navy pilot, he spent five years as a POW) and a six-term senator who went head-to-hear with Barack Obama during the 2008 presidential election, McCain passed away on Saturday, August 25, in his native Arizona.

Tributes poured in after his death. Hillary Clinton took to Twitter, writing, “He was a tough politician, a trusted colleague, and there will simply never be another like him.” Meanwhile, Obama proclaimed, “Few of us have been tested the way John once was, or required to show the kind of courage that he did.”

No tribute was as moving, however, as the one that came from his daughter, Meghan McCain.

The 33-year-old co-host of The View penned a heartbreaking note to her dad. “I was with my father at his end as he was with me at my beginning. In the thirty-three years we shared together, he raised me, taught me, corrected me, comforted me, encouraged me, and supported me in all things,” she began. “He loved me, and I loved him. He taught me how to live. His love and his care, ever present, always unfailing, took me from a girl to a woman — and he showed me what it is to be a man.”

“All that I am is thanks to him,” she continued. “Now that he is gone, the task of my lifetime is to live up to his example, his expectations, and his love. … He was a great fire who burned bright, and we lived in his light and warmth for so very long. We know that his flame lives on, in each of us. The days and years to come will not be the same without my dad — but they will be good days, filled with live and love, because of the example he lived for us.”

Senator McCain’s wife, Cindy, also shared a moving tribute, writing, “My heart is broken. I am so lucky to have lived the adventure of loving this incredible man for 38 years. He passed the way he lived, on his own terms, surrounded by the people he loved, in the the place he loved best.”

My heart is broken. I am so lucky to have lived the adventure of loving this incredible man for 38 years. He passed the way he lived, on his own terms, surrounded by the people he loved, in the the place he loved best.

Barbara Pavone
Barbara Pavone is a pop culture-obsessed writer based in beautiful (but ridiculously cold) Montreal, Canada. When she's not working, she's sipping on a Pimm's Cup and daydreaming about her celebrity hero, Saint West.
Current Events
More From Current Events