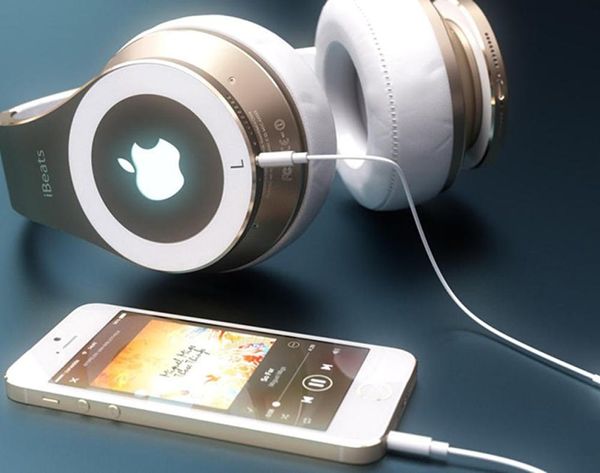 The iPhone 6 may be the most anticipated belle of the WWDC ball, but is are on a couple other products looking to make their entrance into the market/our wish lists after June 2. Apple is getting into the wearables game in a whole new way with the just-finalized Beats acquisition, and you know we are still waiting not-so-patiently for a more definitive view of the Apple-approved wrist wearable. To tide you over until Monday’s conference, here are new looks at both!

Although the deal is newly inked (and .2 bil less than initially reported), there has been massive speculation about what Apple’s $3 billion Beats acquisition will mean for the future of both companies + the possible collaboration on gadgets. While many suspect Beats’ future function will be more in wearables than audibles, Curved imagined what a Apple/Beats baby would look like in headphones-form.

Next week’s WWDC will boast a little more traditional starpower on its stage with Beats co-founders Dr. Dre and Jimmy Iovine rumored to appear alongside Apple’s exec team.

Onto #WCW! Or, as we’re going to start calling hump day: Wearable Crush Wednesday! Remember this mockup of the iWatch that showed a banded wearable similar to the since fallen Nike Fuelband — like a sleek marriage between an iPhone and a FitBit?

Well, forget about it. According to a new report from Business Insider, the upcoming iWatch will look like a (drumroll) well, a watch. With a round face.

Their source (an analyst for Rosenblatt Securities with supply chain connections in Taiwan) says the iWatch will have a round face, with a look similar to Google’s Android Wear (left) and Motorola’s Moto 360 (right) but with a “slimmer profile.” There will be two models (A men’s and women’s? Budget and higher end versions? One for music, one more health-focused?) and will go into production around July and August.

This thorough concept from Stephen Olmstead shows all of the functions of iOS 7 in wearable (circular!) watch form.

An equally insanely-detailed mockup from industrial design student Tomas Moyano shows it as a disc that fits into a watchband and can be clipped onto your shirt, taken for a swim or even worn around your neck.

Shucks, don’t you guys want to make wearables with women top of mind so we can stop cropping photos of hairy arms checking the time? :-X

Make sure to check back here on June 2 — we’ll keep you updated about the news and updates from WWDC!

What do you think of iBeats and the iWatch? In a dream world, which would you rather rock?

Lisa Raphael
In her past professional lives, Lisa has served the masses as the Editorial Director at Brit + Co, Bieber Whisperer at J-14, Golden Girls Fan Club Prez at Lifetime and Talk Show Host Understudy to Katie Couric. Now, she's taking on the sports world at The Relish, teaching Hairography 101 in her spare time and will forever be trying to fill the hole Zayn Malik left in her heart.
Apple
Tech
Apple