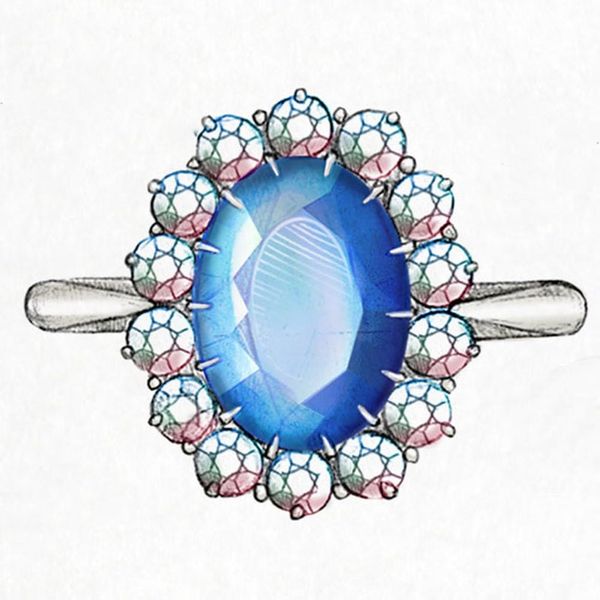 Stars, they’re just like us – until they flash their million dollar engagement ring on Instagram… Don’t get us wrong, we’re major fans of non-traditional rings, but you can’t deny that there is something utterly stunning about those massive rings so often spotted on celebrities (ahem, anyone see Lady Gaga’s $500K diamond?). If you’re ready to go on a glitzy, engagement ring-themed journey, you’re in luck, because Pragnell, a bespoke UK-based jeweler, has created illustrations of the six most iconic engagement rings of our time. Scroll on down to take a look.

1. Queen Elizabeth II: Prince Philip proposed to England’s current Queen in possibly the most British way ever: while out on a walk around the family’s estate in 1946. The two were married the following year in Westminster Abbey where 2,000 people were invited and 200 million people listened via the radio. The diamonds from this ring were taken from Prince Philip’s mother’s tiara. The diamonds not used in the engagement ring were used to craft a diamond and platinum bracelet which Philip gifted to the Queen as a wedding present.

2. Jackie Kennedy: The story of John F. Kennedy’s proposal to Jackie is surrounded by some debate. Some say he did it over the phone while others are adamant it happened inside a tavern in Georgetown. Either way, she ended up with this emerald and diamond stunner. Jackie was notoriously fond of emeralds. On their 10th anniversary, John gifted Jackie an emerald ring featuring ten stones, one for every year they’d been married.

3. Audrey Hepburn: Much like Elizabeth, Mel Ferrer proposed to Audrey while in a garden. Always the trend setter, Audrey skipped a massive rock in favor of three rings she could mix and match to suit her mood. More often than not she wore all three together.

4. Elizabeth Taylor: In classic Elizabeth Taylor style, Richard Burton popped the question while their yacht was moored on the River Thames in London. This style of rock was originally called the “Krupp Diamond” but after Elizabeth sported her ring it became known as the “Elizabeth Taylor Diamond.”

5. Grace Kelly: Prince Rainier III of Monaco and Grace Kelly met while at the Cannes Film Festival. They began corresponding, and when she went to visit him during the Christmas holiday of 1955, the Prince proposed only three days after she arrived. The Prince had initially presented Grace with a modest ring but when he saw what other actresses were wearing he decided to upgrade to something more dramatic.

6. Kate Middleton: I mean, who hasn’t gawked over this ring a time or two? Prince William proposed to Kate while they were on holiday in Kenya back in 2010. Much like the Queen’s wedding, Kate and Will were married in Westminster Abbey and the ceremony was broadcasted in over 180 countries. When proposing, William presented Kate with a selection of rings to choose from. She ended up picking this blue sapphire ring that had belonged to his mother, Princess Diana.