Inception Donuts Are a Thing, and the Internet Is Losing Its Collective Mind 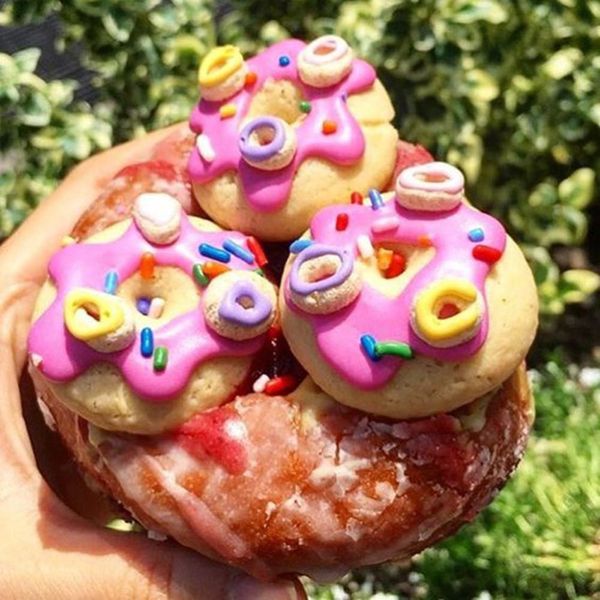 Donuts on donuts on donuts — could anything make us happier? If you’re as obsessed as we are, then you probably celebrate each year with a stacked donut birthday cake, you have your room decked out almost exclusively in donut decor and you squee at the mere thought of mini rainbow donuts. Well, Cinnamon Snail just took our obsession to another level with Inception Donuts. Raspberry filled, rainbow glazed and topped with sugar cookies decorated to look like donuts, which are then topped with hand-frosted cereal O’s, these donuts truly are the stuff of dreams.

1. Is This Real Life?: Cinnamon Snail shows off a box of their brain-bending creations. Careful — when seen in a group like this, these donuts-on-donuts-on-donuts can damage your entire understanding of reality.

2. All-Donut Diet: Just one of these donuts is enough to keep our mouths and bellies happy for days.

3. The Littlest Donut Fiend: This baby is giving us serious #UnicornParty goals.

4. Inception Donut Surprise: That crackly rainbow glaze tho… And did we mention the raspberry filling?

5. Donut Party: If inception donuts aren’t your thing (um, what?), Cinnamon Snail serves up a variety of amazing vegan options. You might just have to get one of each.

6. Princess Donuts: We agree they are sparkletastic. Brain = exploded.

Sadly, Inception Donuts were only available on National Donut Day, but we hope with enough begging, Cinnamon Snail will bring them back. In the meantime, we’ll just have to drown our sorrows. Drunkin’ Donuts, anyone?

Sarah James
With an MFA in Costume Design and a website dedicated to sous vide cooking, Sarah's been in the DIY space since long before it was cool. She was the Food + Living editor for Instructables.com where she produced three books including How to Do Absolutely Everything, and the Think Tank director at Betabrand where she designed the bestselling Dress Pant Yoga Pants. Sarah also worked as a make-up artist for Blue Man Group and has built costumes for film, theater and dance.
Breakfast Recipes
Entertainment
Breakfast Recipes Sweets
More From Entertainment