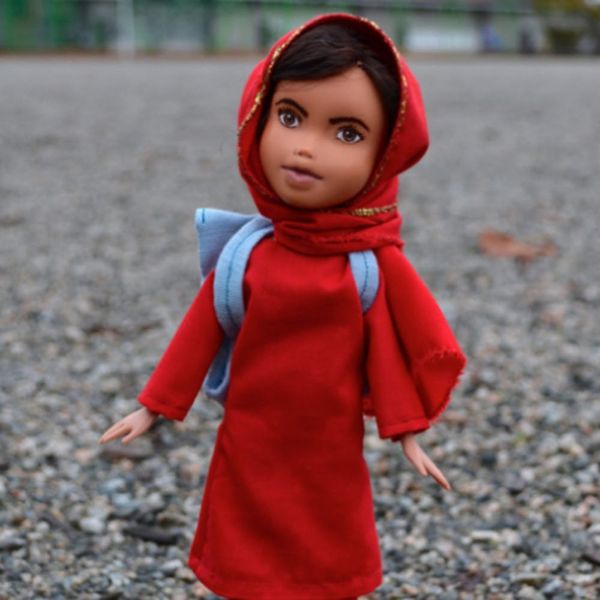 These days, it’s a struggle for parents to find dolls that paint a healthy image for young people. Barbie, even after a superhero and techy makeover, is perhaps still the most well-known “sexy” doll to portray unrealistic proportions (the original 1959 version had a tiny 18-inch waist). Aside from physical features, many dolls today aren’t doing much to inspire girls and break stereotypes. That’s where artists like Wendy Tsao come in. Eight years ago, Tsao founded Child’s Own Studio, which creates toys based on children’s drawings. Now she’s switching things up a bit and repurposing Bratz dolls into inspiring women, including Jane Goodall and Malala Yousafzai.

The series is called Mighty Dolls and was inspired by Tree Change dolls, which are repainted Bratz dolls created by artist Sonia Singh. According to Tsao’s website, Singh provides how-to videos for how to repaint Bratz dolls. “Brushing their hair and dressing them in their new clothes bring back memories of forgotten childhood play,” Tsao says via her website. “I enjoy designing their clothes and knitting their little tops, and I like seeing their personalities emerge as I paint their faces.”

These new creations still look a bit like the original Bratz dolls, although their features are much more realistic and the intense makeup has been removed. They also have new outfits to reflect the inspirational women Tsao features including Roberta Bondar, the first female Canadian astronaut; Malala Yousafzai, Pakistani activist and youngest Nobel Prize laureate; Jane Goodall, British primatologist; Waris Dirie, model, author and social activist; and J.K. Rowling, British author. Despite the slight resemblance to the original Bratz dolls, we love the idea behind it and think it’s a great way to encourage girls to shoot for the stars.

Tsao says she plans to auction off the dolls on Ebay in a few weeks. And if you want to make one yourself, there’s still plenty of time before the holidays to create a fabulous DIY gift. Check out these how-to videos from Singh!

What do you think of the dolls? Let us know in the comments.

Corie Hengst
Corie is a freelance writer, editor and self-proclaimed grammar nerd. Over the years, she has written and edited a variety of articles ranging from travel to finance to beauty. When she’s not writing, you can find her surfing travel websites, cooking and teaching at Gotham Writers’ Workshop in New York City.
Moms