New Superhero Barbie Is Not Exactly Here to Save the Day 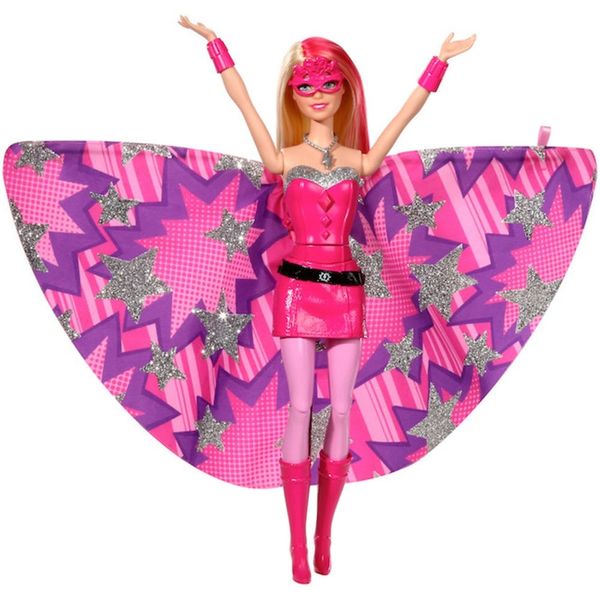 There’s a lot to like about the first superhero Barbie from Mattel. She’s got a stylish pink dye job, she loves glitter and she rocks some killer cuffs. In response to a global survey of girls between the ages of 3 – 10, Mattel discovered that little girls wanted superhero toys of their own. (Duh.) But that same survey asked if superheroes were more fun than princesses… and a majority said no. Which is why superhero Barbie has another, less exciting identity: princess :-/

Okay, so it’s pretty nifty that her cape also doubles as her ball gown, but we have to wonder, why wasn’t being a superhero enough for Barbie? Maybe she needed an escape from that taxing royal life. Waving in parades and dancing around a ball room can be pretty boring. We don’t blame her for turning that skirt into a cape.

Mattel explained the princess/superhero combo career in their press release by saying that “girls don’t want to choose.” Whether or not you’re irritated that Barbie couldn’t be a superhero without also being a princess, you have to agree that women can and should have it all. Why should Barbie have to choose just one path? After all, she’s had more than 150 careers in her lifetime.

Do you think Princess Power Barbie is good for little girls’ self esteem or is she just perpetuating a stereotype about women? Let us know in the comments!

Amanda DiGiondomenico
Amanda is a freelance writer and graphic designer who blogs about living a stylishly nerdy life at The Spendicate. A lifelong resident of Baltimore, MD, Amanda is an art school dropout, who managed to earn a masters degree in nonfiction writing. On the weekends, she's an expert guacamole maker, a novice jogger and an intermediate yogini.
Feminism
Parenting
Feminism
More From Parenting