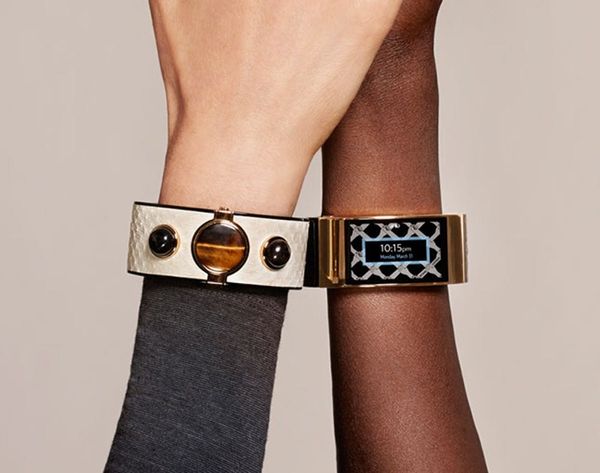 Diane von Furstenberg may have been the odd designer out when she sent Google Glass down the runway with her famed wrap dresses in 2012. But fast-forward to 2014 — just two years/four seasons later — and wearables have actually surpassed shoes, bags and sunnies as the accessories to see at certain big-name shows. First up was a duo of Bluetooth-connected bracelets from Rebecca Minkoff that will make its runway debut at her September 5 New York Fashion Week Show. And now, fashion girls have another high-tech pair to swoon over, courtesy of Opening Ceremony and Intel.

Called the MICA bracelet, or My Intelligent Communication Accessory, the gadget combines luxury flourishes like semi-precious gems and water snakeskin with cutting-edge technology. Both the black and white styles feature a curved sapphire glass touchscreen display that shows SMS messages, alerts and other general notifications right on your wrist, though additional features and functionalities are still TBD, according to the press release.

The bracelets will be available at select Barney’s and Opening Ceremony stores just in time for the holidays, but you can see the bracelets in action before you have to bust out the gift wrap at Opening Ceremony’s upcoming Spring ‘15 fashion show — and you’re going to want to. It’s reimagined as a one-act play, co-written by Jonah Hill and directed by Spike Jonze, no joke. Amazing? Astounding? OMG-Worthy? Our hopes are just as high for the wearables as they are for the spectacle soon to surround them.

What’s your take on this latest high-fashion gadget? Love the luxe or too over the top? Tell us in the comments below.