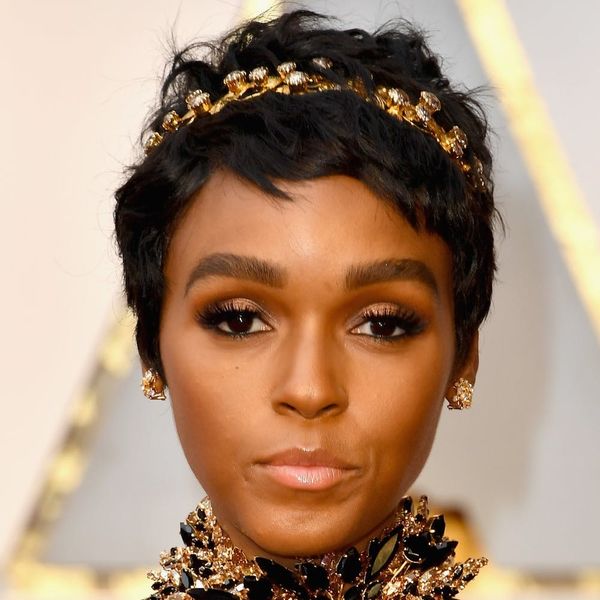 Of all the gorgeous gowns to ever walk the Oscars red carpet, one of the most memorable has to be Halle Berry’s 2002 Elie Saab gown. The actress famously wore the half-sheer floral applique gown to accept her win for Best Actress, which cemented her place in history as the first black woman to win the award for that category.

Now, 15 years later, Berry is still the only woman of color to hold the title (another point to be made for why the Oscars still aren’t diverse enough), but one actress walking this year’s carpet is reviving her breathtaking look.

Donning the same designer that gave life to Berry’s stunning style, Janelle Monáe’s straight-off-the-runway frock seemed to be a modern day take on the masterpiece. Sure, the colors have been swapped from a deep magenta hue to black, and measures have been taken to jazz it up (namely, the beaded front panel, silver and gold embellishments, and ball gown skirt), but its core remains largely the same.

The crux of the dress — its daring sleeveless sheer top — is still there, with adornments placed *just so* as to not give away either lady’s modesty. It’s bold, yet still feminine: a mainstay of Saab’s.

Monáe might not be up for any awards tonight a la Berry (although Ruth Negga, nominated for Loving, has a chance to join her ranks — eee!), but in our books, she’s already won big, doing the Oscar winner’s beloved look justice in every way.

Do you like Janelle’s modern take on this Oscars classic? Give us your opinion @BritandCo.

Nicole Briese
Nicole is the weekend editor for Brit + Co who loves bringing you all the latest buzz. When she's not busy typing away into the wee hours, you can usually find her canoodling with her fur babies, rooting around in a bookstore, or rocking out at a concert of some sort (Guns N' Roses forever!). Check out all her latest musings and past work at nicolebjean.com.
Red Carpet
Celeb Style
Red Carpet