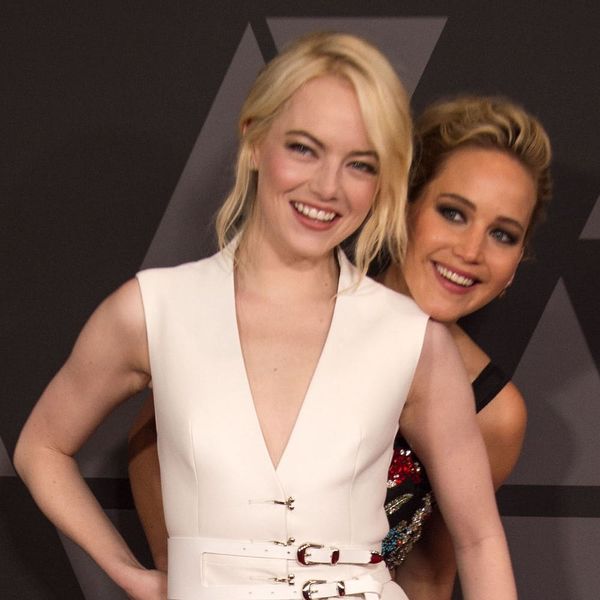 Jennifer Lawrence and Emma Stone may compete for top roles in movies, but they’re also IRL BFFs. In fact, JLaw was supposed to be Stone’s date for the Golden Globes afterparties this year — until the La La Land actress had a change of heart.

With her nomination in the Best Actress in a Motion Picture Musical or Comedy category, the Battle of the Sexes star was expected to attend one (or more) of the afterparties where celebs gathered to let loose after the ceremony. Lawrence was in the middle of getting herself all glammed up to join Stone for the fun when something happened to totally change her plans.

The Mother actress explained the situation in a video on Facebook. At the start of the video, you see only half of Lawrence’s face, in profile, as Stone (who’s recording) asks, “What happened tonight?”

“Well, you had told me that you wanted me to be your date to the afterparties so I, you know, got us some tickets to some afterparties,” Lawrence replies, still facing off to the side. “I booked a car and I was halfway through glam” — here she turns to look at the camera, and we see the results of the sudden interruption — “when you told me that you didn’t want to go. You just wanted to come over to my house. So, I sent my hair and makeup team home. And now this is what I look like.”

As Stone laughs, Lawrence shows off her half-done makeup, complete with one smokey eye and one bare eyelid. It looks like she really did tell her team to halt their work right in the middle of the action.

We gotta say, we love that she’s willing to trade a glam night out for a girls’ night in. And if there’s anyone who can pull off a single smokey eye, it’s probably Jennifer Lawrence.

What’s your idea of the perfect girls’ night? Let us know @BritandCo!

Desiree O
Desirée O is a ‘Professional Bohemian’ who loves anything and everything related to the arts, entertainment, and pop culture. She ADORES being a ‘Newsy’ for Brit + Co, covering all of the latest tidbits of awesomeness that you want to read about. When she’s not writing, she’s either making messy art, going on long adventurous walks with her camera, or poking around over at bohemianizm (http://www.bohemianizm.com/). You can find out about Desirée O and her work at http://DesireeO.com/ or follow her on Twitter @DesireeO.
Celebrities
Celebrity News
Celebrities Friends Golden Globes