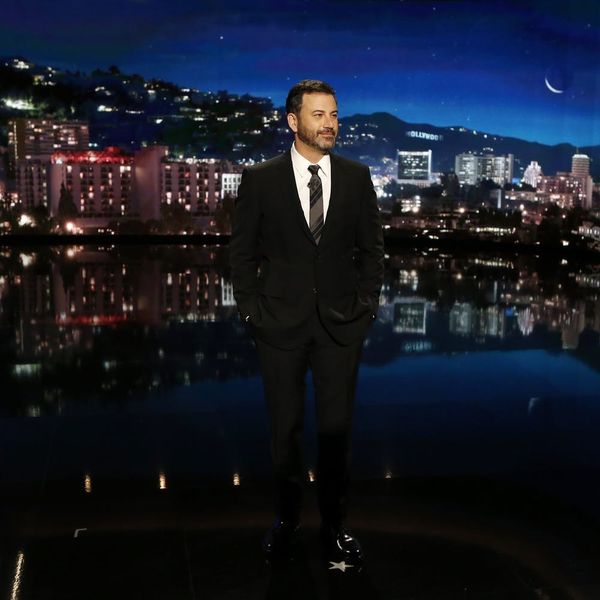 Many celebs have expressed their heartbreak over the Las Vegas shooting on Sunday night. But the tragedy hit especially close to home — quite literally — for Jimmy Kimmel, who hails from the Nevada city. On Monday, the late-night host broke down while talking about the horrific violence in an emotional, searing, nearly 10-minute monologue.

“This morning, we have children without parents and fathers without sons, mothers without daughters. We lost two police officers. We lost a nurse from Tennessee. A special-ed teacher from a local school here in Manhattan Beach,” the popular television personality said, tears streaming down his face.

Struggling to keep his composure, he continued, “It’s the kind of thing that makes you want to throw up or give up. It’s too much to even process — all these devastated families who now have to live with this pain forever because one person with a violent and insane voice in his head managed to stockpile a collection of high-powered rifles and use them to shoot people.”

Alternately angry and grief-stricken, Kimmel urged his viewers and fellow citizens to action. “I’ve been reading comments from people saying, ‘This is terrible but there’s nothing we can do about it.’ But I disagree with that intensely,” he said, his voice breaking. “Because of course there’s something we can do about it. There are a lot of things we can do about it. But we don’t, which is interesting. Because when someone with a beard attacks us, we tap phones, we invoke travel bans, we build walls, we take every possible precaution to make sure it doesn’t happen again. But when an American buys a gun and kills other Americans, then there’s nothing we can do about that. And the Second Amendment, I guess — our forefathers wanted us to have AK-47s is the argument, I assume.”

He went on to talk more about gun control, at one point saying, “I want this to be a comedy show. I hate talking about stuff like this. I just want to laugh about things every night, but that — it seems to becoming increasingly difficult lately. It feels like someone has opened a window into hell. And what I’m talking about tonight isn’t about gun control, it’s about common sense. Common sense says no good will ever come from allowing a person to have weapons that can take down 527 Americans at a concert. Common sense says you don’t let those who suffer from mental illness buy guns.”

Recounting the deadly MGM and Hilton hotel fires that occurred in Las Vegas in 1980, when he was just 13 years old, Kimmel pointed out that laws were changed to make sure something so terrible (and preventable) never happened again. And it hasn’t. “Why would we approach this differently?” he asked, tearfully. “It’s a public safety issue. And something needs to be done already.”

After urging his viewers to make their voices heard so we don’t ever have to live through another tragedy like this again, he closed by saying, “I’m sorry for getting emotional. I’m not great with this kind of thing… but it’s important.”

Watch his full monologue above.

What do you think about Jimmy Kimmel’s remarks? Let us know @BritandCo.