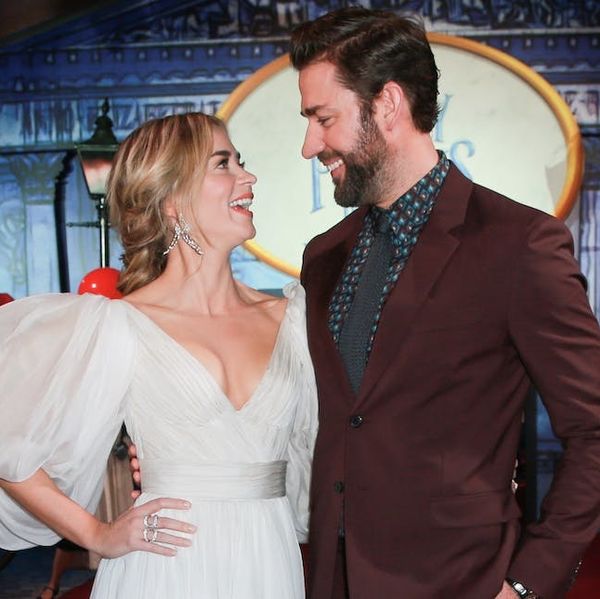 No one is a bigger fan of Emily Blunt than her husband, John Krasinski. In the decade they've been together, Krasinski has often made a point of praising Blunt in interviews, whether because of her acting talents or because of her dedication as a mother to their two daughters, Hazel and Violet. Luckily, that's given us lots of material to swoon over. Here are just 11 of the surely infinite times John Krasinski was Emily Blunt's biggest fan. (Photos via Getty Images)

When he saw her in The Devil Wears Prada. Krasinski has admitted to seeing Blunt's The Devil Wears Prada about 75 times, but he has also praised her dramatic turns in films like Sicario and The Girl on the Train. "There's nothing she can't do," he told Entertainment Weekly. (Photo via John Shearer/Getty Images for AMC)

When they met. "She's one of the coolest people, she's so talented, she's beautiful, and she's certainly out of my league," Krasinski told The Daily Beast of first meeting his now-wife. "And so all of a sudden all of the things I loved, I got to find someone who loved that about me. There was a lot of my life that she hadn't experienced and a lot of her life that I hadn't experienced, so all of a sudden we got to start doing things that we liked." (Photo via Alberto E. Rodriguez/Getty Images)

When they fell in love. "Emily, through any lens, is someone that you just pinch yourself that you even get to be around her, let alone [be] married to her," Krasinski told Entertainment Tonight. No, YOU'RE crying! (Photo via Christopher Polk/Getty Images for TNT)

When they tied the knot. "[Marrying Emily] is legitimately my greatest achievement, and I'm okay saying that," Krasinski told Huffington Post. (Photo via Christopher Polk/Getty Images for BFCA)

When they had kids. Krasinski told People that he's "so proud to know that my daughters are going to grow up knowing that their mom is an incredibly hardworking, wonderful woman." (Photo via Dimitrios Kambouris/Getty Images)

When he wakes up every day. "I wake up every morning with a smile on my face, waiting for the next amazing moment that she'll have with the kids," he said on the Today show. "I'm living a lottery ticket life. My wife is my hero in every single way. Truly, every single day I'm blown away by her, so I'm always looking to her for inspiration." (Photo via Jason Merritt/Getty Images)

When he first heard her sing. Krasinski says he cried watching her rehearse for 2014's Into the Woods. "[Director] Rob Marshall did the slowest double take of all time and then queued a 125-piece orchestra and she started singing and I just wept," he told the Huffington Post about hearing Blunt sing during rehearsals for the film. "It was like finding out that your wife can levitate. It was just like, 'When were you going to tell me this!?'" (Photo via Dia Dipasupil/Getty Images for SCAD)

When she agreed to do A Quiet Place. Krasinski admitted he was nervous when he first approached Blunt about starring in A Quiet Place, which he directed and co-wrote. "I've been next to her when she's made all these amazing decisions and she's without a doubt the classiest, smartest, most dedicated actress I've ever known," Krasinski told Jimmy Kimmel about giving her the script to read. "And when you see how much she puts into every role, I didn't want her to come to set just for me." Luckily, it didn't take much convincing — she asked to be in the movie before he could officially ask her. (Photo via Jamie McCarthy/Getty Images)

When he watched her work on A Quiet Place. "The air changes in the room when she starts doing what she does. It's so honest and so pure and so powerful," he told Vanity Fair of watching his wife work. "It's like a superpower that she can just unlock and do so specifically with not many attempts. For me, I love acting, and I'm so lucky to be doing it. But she's on another plane. This weird intersection happened while filming where I totally forgot I was her husband. I was just watching her performance and was lucky enough to be in the front row." (Photo via Gareth Cattermole/Getty Images for Paramount Pictures)

When he saw her in Mary Poppins Returns. "I was crying so much I blew through the tissue box in 20 minutes," Krasinski told Ellen DeGeneres during a recent appearance on her talk show. "[I] had to go to the napkins, and then when I ran out of napkins it was all sweater. Just a lot of [wiping tears], 'Oh, it's so beautiful!'" (Photo via Rich Fury/Getty Images)

Whenever she does anything, basically. "[She's] hilarious, extremely talented, and I’m definitely her number-one fan," he told People. Cue the tears. (Photo via Christopher Polk/Getty Images for BFCA)