Could a $15 Chocolate Bar Possibly Be Worth Its Exorbitant Price? 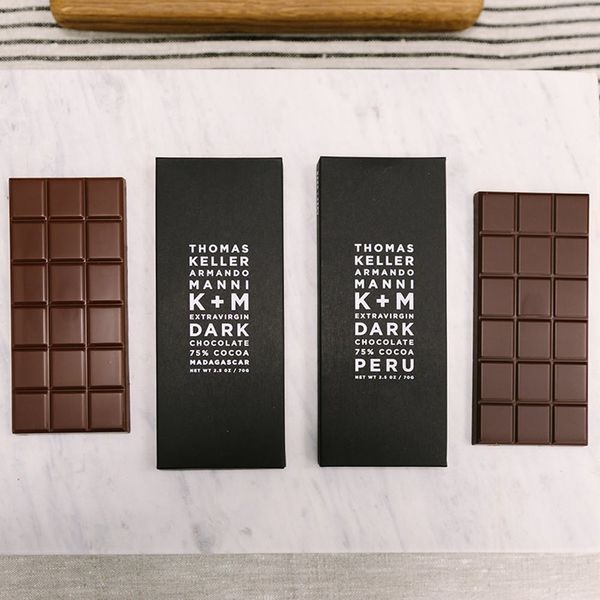 Chef Thomas Keller, famed owner of The French Laundry restaurant, has taken on a new passion project: developing gourmet, bean-to-bar chocolate that are ultra-high in antioxidants… and yes, it’s backed by science.

Keller revolutionized American fine dining and practically invented food hybrids when he put salmon in an ice cream cone or “cornet.” Now he’s partnered with extra virgin olive oil producer Armando Manni to form K + M extra-virgin, single-origin chocolates. As the name implies, these bars replace added cocoa butter with EVOO. As with most of Keller’s ventures, the treats don’t come cheap: Each of the 2.5-ounce bars will set you back $15. To find out why that price tag is so high (and if they’re worth it), we went behind the scenes of the chocolate factory to get a taste of what really goes into making a high-end chocolate bar.

To understand the complexity of this chocolate project, it’s worth noting that developing the line of bars have been seven years in the making. Keller’s team, lead by chocolatier Chi Bui, sourced from free-trade locations all around the world and established relationships with the growers to find the best-tasting beans with the most antioxidants from rare locales, in some cases out of rural forests. Before the beans are processed at the chocolate factory in Napa, California, they pass two tests, one by chef Bui and the other by scientists at the University of Florence for flavor and antioxidant potential.

The cocoa is exposed to heat in almost every since step of the process from roasting, to grinding, to melting, all of which typically destroy an upwards of 60 to 80 percent of antioxidants in most chocolates. K + M had to build special machinery to protect the beans from as much heat as possible in order to maintain the most antioxidants. Bui oversaw the process of creating one-of-a-kind equipment for their factory alone.

Another hurtle the team had to surpass: how to replace extra virgin olive oil for added cocoa butter, another classic ingredient in chocolate. While swapping one fat for another doesn’t seem like a big deal, chocolate is temperamental. The slightest change in temperature or shift in ingredients can cause disastrous, inedible results. To achieve that ideal shiny look and for the chocolate to snap when broken, the sugar molecules, cocoa, and fat have to emulsify together under precise temperatures. For three years, Bui worked on the formulas for flawless-tasting chocolate bars.

To make matters even more mind-boggling, the beans from each origin, including Ecuador, Nicaragua, Madagascar, and Peru, require different recipes and temperatures. For instance, when roasting the beans, some are more blonde while others are darker, like coffee. Even when chocolate is made, it’s nowhere near being ready for release. It’s aged in a refrigerator like fine wine to balance any volatiles (think funky scents and flavors) before it’s tempered with the olive oil, drizzled into the chocolate molds to set, and packaged for public release.

The finished bars, wrapped in a sleek, minimalist card stock box, are all 75 percent cocoa (the remaining 25 percent sugar). Bui made the choice to stick to one percentage to give tasters the opportunity to really distinguish the different flavor notes that range from more citrusy-caramely (Madagascar) to earthier and spicy (Equador) to robust and coffee-like (Nicaragua). What you won’t taste is the olive oil, though it provides a micronutrient boost of polyphenols.

The entire flight includes four dark chocolates, two dark-milk chocolates, and two whole milk chocolates. Even if you’re a huge dark chocolate fan, don’t miss out on trying the creamy milk chocolates with no tannic bitterness, mild sweetness, and a luscious mouthfeel like butterscotch. With one or two squares snapped off the bar, you’ll feel satisfied, unlike other bars out there. It’s like a controlled indulgence. Perhaps K + M chocolate won’t replace your everyday Hershey’s, but that’s not its aim. It’s more of a bucket list experience, like a once-in-a-lifetime vacation. It’s an opportunity to see how chocolate from all over the world differs and for at least one square, be transported halfway around the globe. So in a way, it may be the most cost-effective trip!