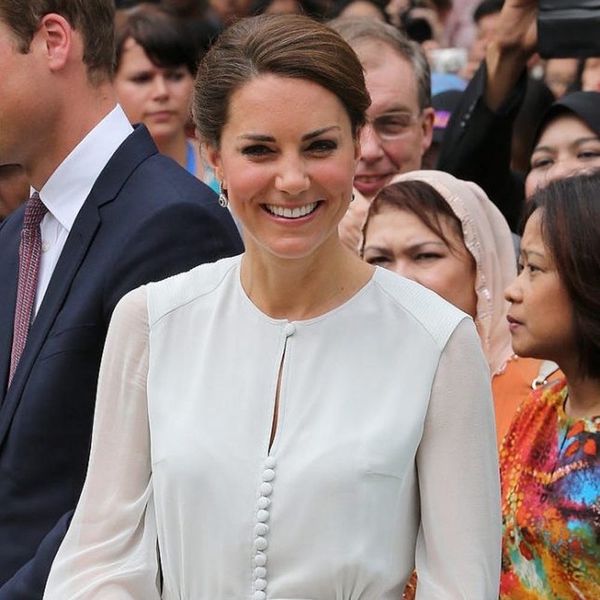 Kate Middleton has already reached style icon status — and it’s pretty obvious why. She always looks fabulous, even immediately after having a baby! But this week, after her visit to Canada with Prince William and two kids in tow, something else became clear: The Duchess knows how to travel with nary a hair out of place. We may never know how she manages to keep her blowout looking #flawless post-redeye flight, or after chasing Prince George around Australia, but the fact remains: Kate Middleton is officially #travelstyle goals. Here are 10 times when the Duchess’s hair looked amazing while traveling the globe.

1. Windswept Goals: The breezy runway at Heathrow airport was no match for Kate and her stylists. Here, the Duchess’s ends are blown out and curled under with what you’d assume is a royal amount of hairspray to achieve that perfect windblown look. (Photo via Steve Parsons/WPA Pool/Getty)

2. Au Natural Awesomeness: Here’s the Duchess looking like a total goddess as she travels via traditional canoe in the Solomon Islands. Kate let her hair go au naturale to show off her beachy waves. You know, just a typical Tuesday. (Photo via Chris Jackson/Pool/Getty)

3. Perfectly Polished Half Updo: Who could forget when Kate and William took off for Australia for their first overseas trip with Prince George? Kate opted for a shiny, straight look with a half updo that was equal parts royal and real-girl. (Photo via Arthur Edwards/Getty)

4. Chignon Chicness: In the land down under, Kate’s twisted updo for a reception was an absolute knockout. The Duchess was able to pull off this amazing low chignon after weeks of exhausting travel and still look stunning. Meanwhile, we’re busy searching for lazy-girl styles to wear on the couch. (Photo via Arthur Edwards/Pool/Getty)

5. Braided Headband Beauty: For a Canadian canoe excursion, Kate’s hair was styled in a braided headband that epitomized low-key amazingness. We’re keeping this look in mind the next time we want our hair out of our face while still looking polished. (Photo via Chris Jackson/Getty)

6. Fashionable Fascinator: No one can pull off a fascinator quite like Kate. Here, she displays her glorious and glowing blown-out hair at the World War I Wall of Remembrance in Australia. (Photo via Mike Dunlee/Getty)

7. Low Key Low Pony: Wearing your hair down all the time while traveling is not an option. Kate’s low pony, which she wore while visiting a charity center in Canada, is chic and unpretentious, with just a hint of formality. (Photo via Andrew Chin/Getty)

8. Cute and Curly: The Duchess styled her hair in tighter curls as she toured the Taj Mahal. We can only dream of looking this put together when battling India’s legendary heat and humidity. (Photo via Chris Jackson/Getty)

9. Tasteful and Traditional: Kate wore her hair swept back in a beautiful twist as she visited a mosque and attended high tea in Malaysia. The hairstyle was beautiful, but also traditional enough to work for her royal obligations. (Photo via Chris Jackson/Getty)

10. Sensible Side Part: The mom of two left Canada beaming with Prince George and Princess Charlotte leading the way. We can only assume her hair was smartly pinned back to keep kiddie hands from grabbing at it en route. (Photo via Getty)

What are your go-to travel looks? Check us out on Pinterest!