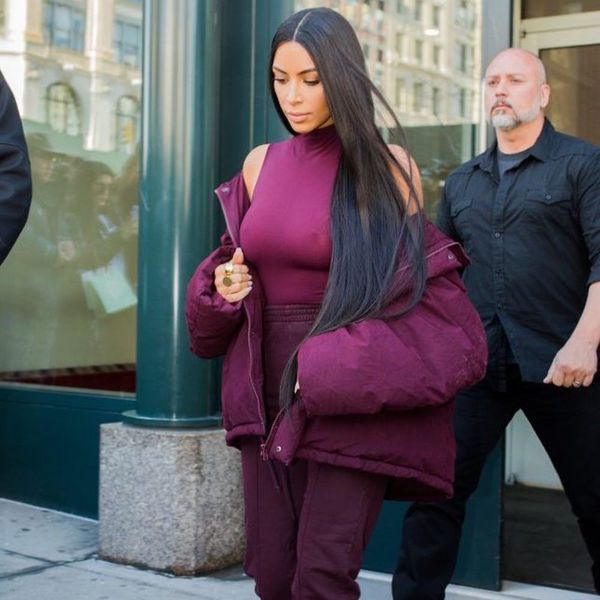 All black everything aside, going all-out monochromatic can be intimidating — winter white included. It’s a sartorial move that feels at home on the runway, but doesn’t always translate to IRL. But during the NYFW FW17 shows, celebs, street style stars and designers proved that head-to-toe color (or neutrals) are the way of the future. The best part about this look-at-me trend? You don’t need to throw down mad cash to pull it off. #winning

1. Perfectly Plum: Kim Kardashian is no stranger to monochromatic ensembles, but the Keeping Up With the Kardashians star is typically spotted sporting neutral hues. Kardashian shook things up during fashion week, stepping out in dramatic shades of magenta, plum and burgundy. We can dig it. (Photo via Team GT/GC Images)

2. Shades of Gray: We’ll admit that Samantha Angelo’s ensemble for the Anna Sui show kinda sorta channeled Storm (especially with the matching silver locks), but there’s something undeniably sophisticated about the monotone look. A pair of quicksilver boots with major It-girl edge pulls it all together. (Photo via Daniel Zuchnik/Getty)

4. Coral Craze: Dion Lee was definitely feeling daring this season — the Aussie designer sent a handful of bold blue, coral and red hot getups in his signature sculptural silhouettes down the catwalk. (Photo via Nielson Barnard/Getty)

6. Winter Whites: Sara Sampaio took the whole model-off-duty look to the next level with an all-white ensemble that had us swooning hard. To prevent the look from feeling flat, the Portuguese stunner played with a variety of textures and silhouettes. (Photo via Michael Stewart/Getty)

9. Fuchsia FTW: We’ll take it all! Metallics and a multitude of purple hues brought the drama in a big way at Creatures of Comfort. And can we just talk about those shoes for a second? All we can say is #goals. (Photo via Andrew Toth/Getty)

11. All Beige Everything: Beige is the new black — or at least it is if Ryan Roche has anything to say about it. Soft shades of beige, biscuit and clay offer a warm and cozy alternative to classic-yet-cold black. (Photo via Victor Virgile/Gamma-Rapho/Getty)

12. Go Green: We salute you, Rachael Wang. The fashion director teamed an army jacket with fringe-trimmed trousers for a don’t-mess look with endless FROW appeal to the Coach show on February 14. The only thing missing (in our humble opinion)? A killer pair of architectural earrings. (Photo via Daniel Zuchnik/Getty)

Libby MacCarthy
Libby MacCarthy is an urban planner turned writer with a love (bordering on unhealthy obsession) of all things fashion and beauty related. She lives for perfectly brewed coffee, farmer's markets, dinner parties and perusing impeccably designed boutiques. When she's not on the hunt for the latest trends, you'll likely find her plotting her next adventure or nose deep in a book. Libby currently splits her time between the East Coast and her adopted home of France. Follow her daily adventures on Instagram.
2017 Style Trends
Celeb Style
2017 Style Trends Fashion Week New York Fashion Week NYFW Street Style
More From Celeb Style