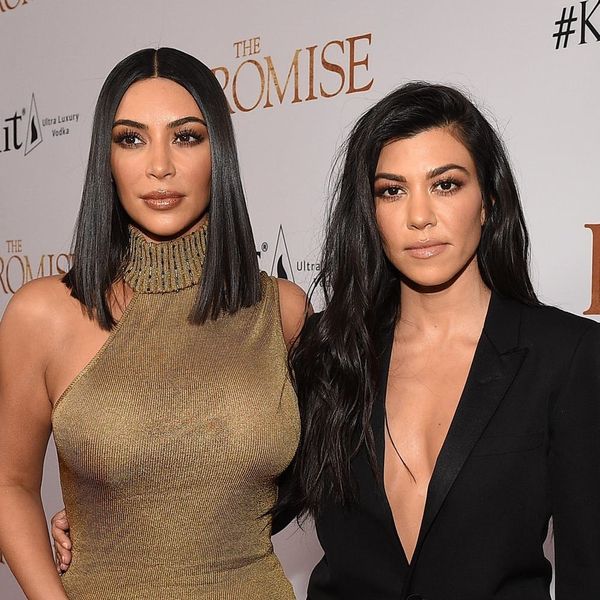 Sonny and Cher weren’t the only music legends Kim Kardashian West paid homage to this year! Just when we thought nothing could ever top the mother of two’s epic couples’ costume with BFF Jonathan Cheban, the reality star went and did it again, teaming up with sister Kourtney Kardashian to recreate yet another famous musical duo.

Donning a slinky white sequined gown with a (faux?) fur stole, a little white clutch, and a diamond statement choker, Kardashian West, 37, was the perfect Madonna to sis Kourtney’s Michael Jackson. Scott Disick’s ex, meanwhile, played the “Beat It” singer to a tee in a pair of leather pants, a gold belt, white blazer, black gloves, and ultra-curly wig.

Their inspiration came from a RL shot of the pair, who shared a kiss or two in their day, at the 63rd Academy Awards back in 1991, for which Madge rocked a Bob Mackie creation — the same designer who made the 1973 ensemble Kim recreated with her ode to Cher.

The KUWTK stars showed off their incredible getups on Instagram stories, panning from the bottom of their insane looks to the top in videos set to tunes from the artists, including Madonna’s “Justify My Love.”

The sister act served to prove that you don’t need to be in a relationship to pull of an epic couples’ look. It also made it plenty clear that the KarJenners don’t mess around when it comes to Halloween. In fact, between this and Kylie Jenner’s “Dirrty” Christina Aguilera getup from last year, we’d say they’re inching their way right up there with Heidi!

Which look did Kim pull of better: Sonny and Cher or MJ and Madonna? Tell us over @BritandCo.