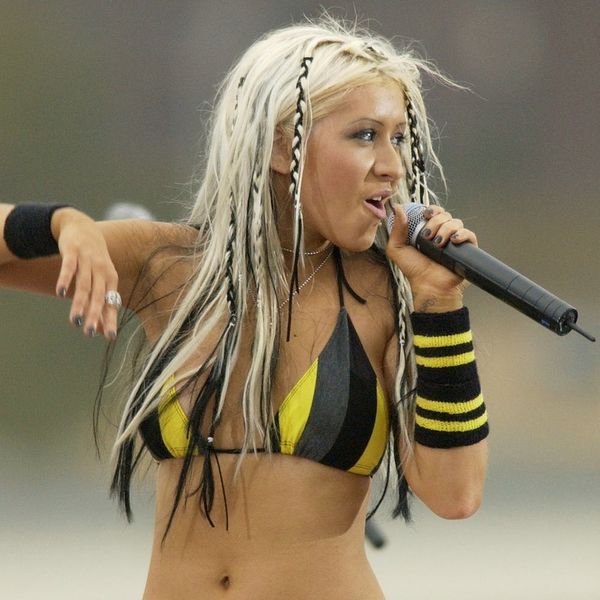 These days, Christina Aguilera is a super chic (check out her sleek ‘90s bob) mommy of two with the most adorable son and baby girl, but back in 2002, she was getting “Dirrty” with the best of them. Rocking skunk-hued dreads and assless chaps, Christina quickly went from her given moniker to one Miss “Xtina” with the release of her “Dirrty” music video.

Now, Kylie Jenner (known to don a few racy looks of her own, truth be told), is resurrecting Christina’s old-school look with a Halloween costume that has jaws dropped.

As with her Halloween Dead Dinner, the attention to detail here is pretty extraordinary: That hair! Those baby blues! The dead-on triangle bikini top!

Can I be XTINA forever 😩😩

Dancing around to the song that launched the look, Kylie writes, “Can I be XTINA forever?”

Tyga (we’d know those hand tats anywhere) accompanied his lady in a red, white and blue outfit as she showed off her killer motocross jacket.

So what does the REAL Xtina think? She was just as impressed as the rest of us, posting Kylie’s photo to her Instagram page and writing the following note on Twitter.

Reminisce with the full vid below!

What do you think of Kylie’s recreation? Share over @BritandCo.

Nicole Briese
Nicole is the weekend editor for Brit + Co who loves bringing you all the latest buzz. When she's not busy typing away into the wee hours, you can usually find her canoodling with her fur babies, rooting around in a bookstore, or rocking out at a concert of some sort (Guns N' Roses forever!). Check out all her latest musings and past work at nicolebjean.com.
Halloween
Music
Halloween Halloween Costumes Kardashians Music
More From Music