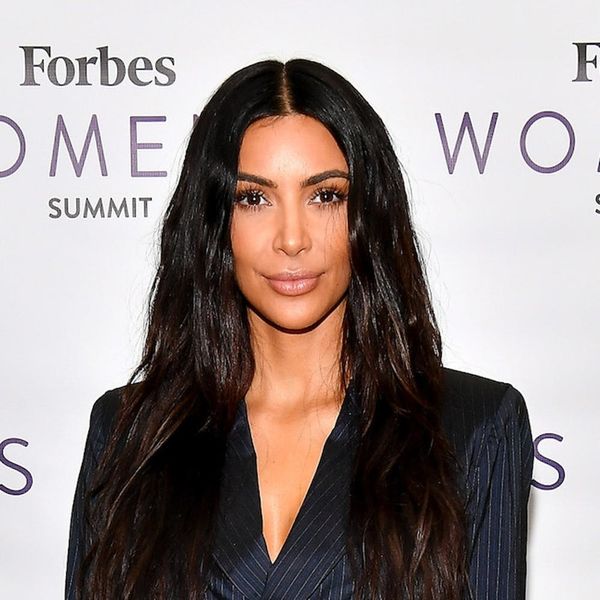 Kim Kardashian recently teamed up with little sis Kylie Jenner to do a Kylie Cosmetics collaboration, and as soon as we saw the perfectly pink-and-peach nude lip kit, it brought to mind one very obvious question: Why didn’t Kardashian have her own makeup brand? Of course, she’s since announced her own line, and the first drop will be a Crème Contour and Highlight Kit (naturally). KKW Beauty is already projected to make almost $15 million within minutes. But it’s also already getting backlash — and it hasn’t even been released yet.

The controversy started when Kardashian released promo pics for the first drop. In the (seemingly heavily edited) image, Kardashian sports a fully contoured look and what she told the New York Times was a dark tan that had people in her mentions and comments accusing her of blackface.

“I would obviously never want to offend anyone,” Kardashian told the NYT of the reaction. “I used an amazing photographer and a team of people. I was really tan when we shot the images, and it might be that the contrast was off.”

She added: “Of course, I have the utmost respect for why people might feel the way they did. But we made the necessary changes to that photo and the rest of the photos. We saw the problem, and we adapted and changed right away. Definitely I have learned from it.” (Her current Twitter and Instagram avatars, while taken from the same photo, do appear to have a lighter contrast.)

But that’s not all — Kardashian gave fans a sneak preview via Snapchat of how they can expect their kits to look when they come in the mail, and some are saying that the packaging looks cheap, uninspiring, and unoriginal.

I'm sorry but doesn't the kkw beauty packaging look like you're just buying makeup from forever 21 but 4x the price?!

Ok but why does the packaging for KKW Beauty look exactly like the ready to eat meals my dad gets in the military 😂😂😂 pic.twitter.com/vNtzjlcoqp

When Kardashian announced KKW Beauty at the Forbes Women’s Summit, she made a point of noting that she was involved in every aspect of the line, including the packaging, so it stands that it would be held to higher scrutiny.

Kylie Cosmetics has also seen its share of complaints: Delivery and product complaints caused the Better Business Bureau to give it a failing grade, and she’s been accused of repackaging old stock and selling it as new.

Of course, it’s very likely that the KKW Beauty drop will be massively successful regardless, especially with the upcoming powder contour and anti-aging concealers Kardashian teased in her NYT interview.

What do you think of the criticisms against Kim’s beauty line so far? Let us know @BritandCo!