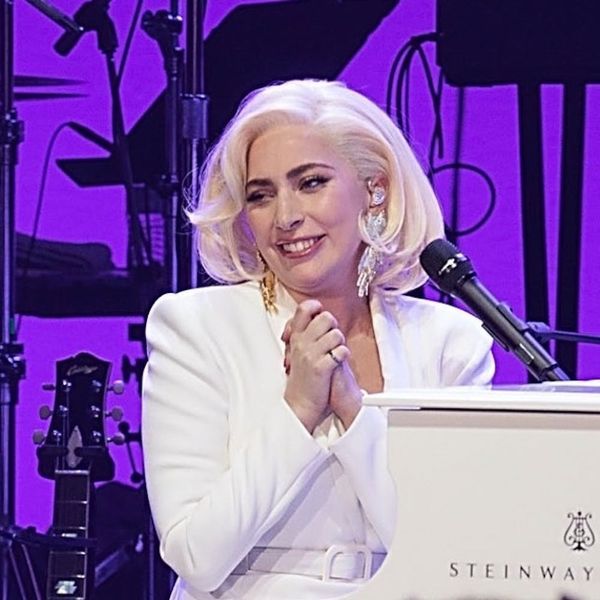 UPDATE: Gossip Cop is disputing US Weekly‘s report that Lady Gaga is engaged, saying that her rep has denied the claims to their publication. “Gossip Cop checked in with a rep for Lady Gaga to get to the bottom of the outlet’s engagement claim, and we’re exclusively assured it’s simply ‘untrue.'”

Just days ago, Lady Gaga shared a romantic photo of herself with her boyfriend Christian Carino that had fans practically swooning. As it turns out, they may have good reason: As multiple outlets, including Us Weekly, Teen Vogue, and the Daily Mail are reporting, the two may actually be engaged!

While the star’s reps have yet to confirm the news, it would certainly be a welcome relationship status update for the singer, who famously went through a heartbreaking split from ex-fiancé Tyler Kinney back in July of 2016 after five years together. She opened up about the split in her Gaga: Five Foot Two Netflix documentary, which was released just this past September. “My threshold for bullsh*t with men is just — I don’t have one anymore. In relationships, you have to move together,” she quipped.Still, the star may have found her happily-ever-after with the man who’s no stranger to celebs: a talent agent with CAA, he’s represented everyone from Justin Bieber and Christina Aguilera to Jennifer Lopez and Miley Cyrus.

The couple was first spotted out together at the spring 2017 fashion show for Tommy Hilfiger and Gigi Hadid’s collaborative collection before being photographed snuggling up prior to the “The Cure” singer’s memorable Super Bowl Halftime Show.

Since then, they’ve been keeping their relationship relatively private, staying off the red carpet as the 31-year-old star takes time off from her Joanne World Tour to deal with the chronic pain she endures due to fibromyalgia.

As we wait for the beloved Mother Monster to confirm the happy news for herself, it’s all we can do not to feel positive giddy — CONGRATULATIONS to the adorable couple!

Are you surprised to find out that Lady Gaga might be engaged to Christian Carino? Let us know @BritandCo!

Desiree O
Desirée O is a ‘Professional Bohemian’ who loves anything and everything related to the arts, entertainment, and pop culture. She ADORES being a ‘Newsy’ for Brit + Co, covering all of the latest tidbits of awesomeness that you want to read about. When she’s not writing, she’s either making messy art, going on long adventurous walks with her camera, or poking around over at bohemianizm (http://www.bohemianizm.com/). You can find out about Desirée O and her work at http://DesireeO.com/ or follow her on Twitter @DesireeO.
Celebrities
Celebrity News
Celebrities Celebrity Engagement Engagement
More From Celebrity News