Does Laughter Have a Place in Medicine? 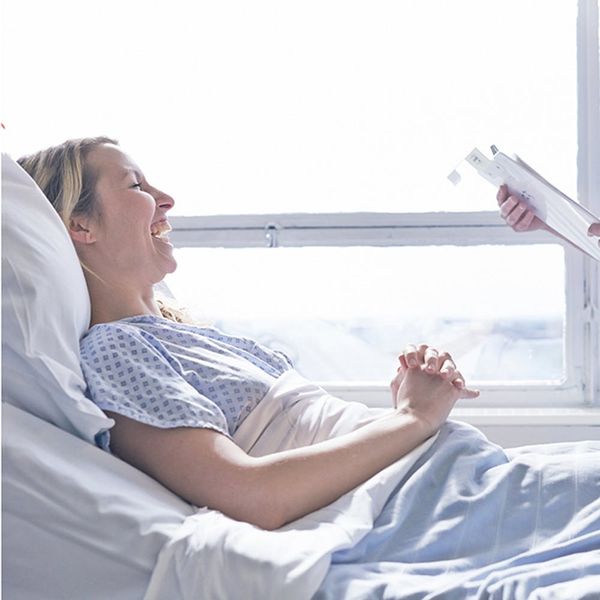 The saying “laughter is the best medicine” is touted in cheesy movies, cheesier Instagram posts, and maybe even by your well-intentioned friends. And while evidence-based medical options like, say, antibiotics, are obviously the best medicines, we wondered if laughter has any place at all in treating illness. Here’s a serious answer.

Morton Tavel, MD, a retired physician of internal medicine and cardiology and now an author of books dispelling medical myths, says that laughter does have some measurable positives. “We know that laughing has the intangible ability to make us feel better — it reduces tension and helps us cope,” he explains. “But laughter has also shown measurable clinical effects in the body: It releases endorphins [endogenous opioids] from the brain, increasing tolerance to pain. In addition, it increases the activity of natural killer cells that strengthen the immune system, lowers levels of stress-provoking cortisol in blood, and is even known to improve vascular function.”

Humor can help doctors and patients connect in challenging circumstances

One of the clearest benefits of laughter and humor in medicine, says Kelly Cawcutt, MD, assistant professor of internal medicine at the University of Nebraska Medical Center, is as a way for patients and doctors to talk about tough subjects. “Laughter may help us engage in talking about more difficult concepts, provide a relatable conversation, and positively enhance communication if done with the perception of shared laughter — as opposed to laughing at someone, which has clearly deleterious effects,” she says. Dr. Cawcutt points to a study published in December 2018 in the Journal of Clinical Oncology, in which researchers found that terminal cancer patients said they used humor to approach difficult topics with their doctors, and to counter challenges they faced as part of their illness. In addition, the study found that 97 percent of oncologists said they used humor in consultations with patients, and 83 percent found it beneficial. That said, the patients and doctors in the study acknowledged that using humor could be tricky, since it is subjective. So while lightening the mood with humor can be helpful in dark times, doctors tend to tread carefully.

Laughter in the lab: What do the studies say?

It turns out we aren’t the only ones who are wondering. Dr. Tavel highlights a few different studies that have found potential benefits from treatments based around humor and laughter. In 2015, the journal Parkinsonism & Related Disorders published a study in which researchers found that taking an improv class could cause a “significant improvement” in the symptoms of people with Parkinson’s disease. He also identifies another study, published in the Journal of Aging Research in 2010, in which one group of care home residents participated in “humor therapy,” while one control group did not. “Researchers found that at the end of the program, participants had significant reductions in pain scores and loneliness measures, as well as significant increases in happiness and life satisfaction scores,” Dr. Tavel enthuses.

There’s even evidence that a good giggle can protect your heart. “Researchers in Japan have found that people who said they never or almost never laugh had 1.21 times higher prevalence of heart disease compared with people who reported laughing every day, even after adjustment for confounding risk factors,” Dr. Tavel says, referring to a study published in the Journal of Epidemiology in 2016. That said, the researchers acknowledged that this could be because people who are dealing with heart disease find it harder to find things to laugh about.

So there is potentially research-based evidence for the benefit of humor as part of medical treatment, but Brian Cassmassi, a psychiatrist based in LA, says that it’s not conclusive. “The results are somewhat contradictory on the significance of evidence-based studies for laughter, though they skew toward positive effects,” he says. “Some studies from circa 2008 did not find statistical significance to the benefits of laughter when healing mental illness and/or physical health.” He adds that it’s only more recently — since 2015 — that more studies have confirmed the potential benefits of laughter, humor, and even smiling. Which means we’ll probably see more studies about humor and health in the future (at least it gives scientists a chance to have some fun!)

Although there is some evidence that laughter and a sense of humor could help to improve a patient’s well-being and their experience of illness, all of our experts agreed that these are no substitutes for actual medicine. “Laughter and smiling help us cope with the realities of life, and even have positive health impacts, but I do not believe they supplant scientific treatments such as antibiotics for an infection, or chemotherapy for cancer,” Dr. Cawcutt emphasizes. “There are limitations to the power of laughter. I do not personally ‘prescribe’ laughter, but it is free and accessible, and if it may help my patients heal, I certainly will continue to support it and laugh with my patients.” If laughter helps you cope with an illness, by all means, see this as an excuse to watch The Office or joke with your family and friends when you can. But note that it’s a supplement, and not a replacement, for doctor-approved, rigorously tested, evidence-based medicine.

RELATED: Getting Clued Up on Heart Disease Could Save Your Life