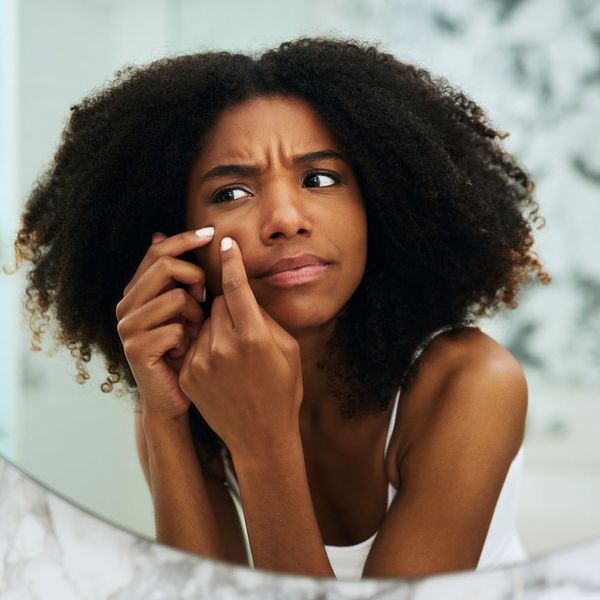 When it comes to the quest for a clear complexion, there are a number of ways to approach your acne attack. Aside from drying out the pimples that have already popped up, you can use treatments that focus on cell turnover to keep pores clear, slowing down the production of oil, or killing the acne-causing bacteria altogether. But new findings from Johns Hopkins University suggest there could be a way to bring your skin into balance and banish blemishes.

The student scientists discovered there was no need to erase all the bacteria on our faces in order to score a flawless complexion. Johns Hopkins researcher Joan Golding argues that it’s normal to have some bacteria and that having a certain amount can actually help keep skin clear. “[It’s] just your skin’s natural environment,” she tells Brit + Co. “You do need some sebum [or oil] on your face, and you need some bacteria to live symbiotically.”

They focused on finding ways to prevent the bacteria from turning on us and causing inflammation. “We wanted to create a product that would work and solve the issue of overproduction of bacteria without too drastically inhibiting the production of sebum on your face or killing off the bacteria,” adds Anna Garcia, another one of the researchers.

The team discovered the solution in a lipase inhibitor, a compound that they found in an over-the-counter weight-loss drug that you might know as Orlistat or Alli, which helps prevent the body from absorbing fat from food when ingested. But in this instance, researchers found the lipase inhibitor was effective in preventing the growth of acne-causing bacteria when applied topically. And with the added power of tea tree oil, the cream they crafted could also calm inflammation and eradicate already active bacteria.

The results could be a skincare game changer as they suggest that the lipase inhibitor and tea tree oil could not only deliver a one-two punch to pimples but also reduce the kinds of side effects we can see with other forms of treatment (like dryness and subsequent oil surge after using benzoyl peroxide or the risks associated with Accutane). “We wanted something that wouldn’t too drastically change the microbiome of your skin [long-term] but would give you the results that you’re looking for as far as controlling your acne,” Garcia says.

The team could easily see their preliminary research develop into a beauty buy or a full range of products like an acne-fighting moisturizer, face mask, or similar treatment that could be applied all over the face. This would work better than a spot treatment since Garcia says the inhibitor needs to be on the face for a certain amount of time before it’ll be activated. As fellow researcher Ariana Sherman, who has tried other acne treatments like Accutane in the past, pointed out, “In my personal experience with trying a new acne regimen, results will not happen in the first month. In fact, things might get worse before they get better.” But in this instance, the slow change stems from the gradual change in the skin’s pH that needs to take place in order to stop the acne bacteria from breeding without causing an adverse reaction in the process. “It takes a while for your face to adjust to the new treatment,” she says.

Golding is excited to continue the research and explore all of its possibilities when she returns to work on her master’s in the fall. “The professor that we worked with said that I’m welcome to continue working on it,” she says. “I have some ideas for different experiments that we could do.”

So while there’s no word yet on whether we’ll be able to get our hands on the skincare essential any time soon, the team hopes to see their hard work show up on shelves eventually. “I think there’s a possibility that it could evolve into a line,” says Garcia. “I think it would be cool if we all saw it in Target or something someday.”

Would you try an acne treatment like this? Let us know over @BritandCo.

Valis Vicenty
Valis Vicenty is beauty writer who started swatching lipstick when she was still in diapers (sorry Mom!). Her work has been featured on Refinery29, NewBeauty, and Glam.com, plus she maintains her own beauty and lifestyle blog, Val’s Vanity, where she regularly shares her favorite finds and inspirations. When she’s not scrolling through her social media feeds for an emerging trend or test-driving the newest beauty buy, you can find her binging on comedy specials and classic movies on Netflix, listening to the latest bestseller as an audiobook, or adapting a new recipe to whatever’s in her fridge.
Beauty Trends
Beauty News
Beauty Trends Skincare products
More From Beauty News