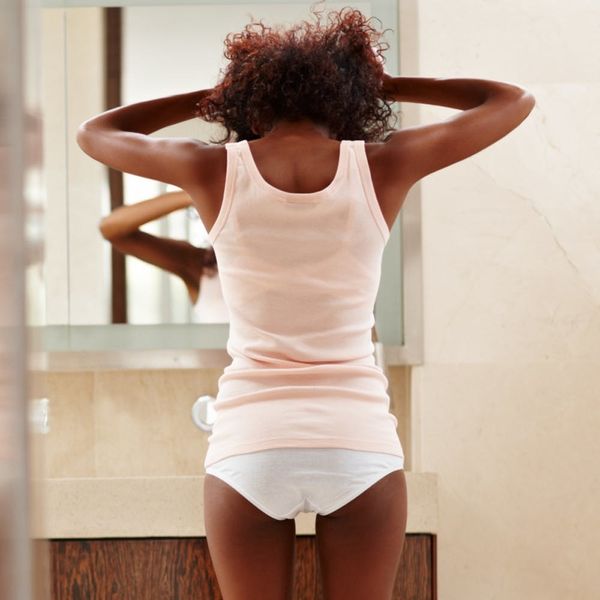 The potential health risks correlated with a body mass index (BMI) that’s categorized as overweight or obese have been well documented, and even used to body shame people in the guise of health advice. However, we don’t often hear about the very real dangers of having a BMI that’s identified as underweight. A new study published in The Lancet looked at how BMI relates to your risk of death from all causes. It found that while a high BMI does increase your risk of dying from certain types of cancers or cardiovascular, respiratory, and digestive conditions compared to people with a BMI in the so-called healthy range, people with a low BMI also saw an increased risk of contracting some of these diseases.

People with low BMIs were the most likely of all participants to die from a mental or neurological disease. And while the life expectancy after 40 years old for a person assigned female at birth with an obese BMI decreased by 3.5 years compared to someone with a healthy BMI, for someone with a low BMI, it was shortened by 4.5 years. “While a low BMI is sometimes perceived as desirable, it is important to recognize that an underweight BMI may signal a health issue, just as an overweight or obese BMI might,” says registered dietitian and certified dietitian nutritionist Alyssa Lavy, owner of Alyssa Lavy Nutrition & Wellness. Read on for the skinny on the health risks of being underweight.

What Health Risks Are Associated With Low BMI?

As the study points out, a low BMI indicates an increased risk of dying from certain cancers and cardiovascular diseases, as well as respiratory, digestive, and blood and endocrine diseases. Part of that reduced life expectancy might be explained by the fact that people often slip into the low BMI category because they are already ill: “A low BMI is often associated with some type of benign illness or a malignancy. That could be digestive (e.g., inflammatory bowel disease or liver disease), respiratory, behavioral (e.g., cigarette smoking, excessive alcohol intake, drug usage), or mental (such as anorexia),” explains Dr. Michael Wood, Director of the Bariatric Surgery Program at DMC Harper University Hospital and Fellow of the American College of Surgeons.

With or without other preexisting conditions, being underweight can have severe repercussions for your health. Dr. Richard Honaker, Chief Medical Officer at YourDoctors.Online, cautions, “When your weight is low, your body has to reroute essentials to the most needy spots, which shortchanges some parts of the body. For example, calcium will be taken out of bone for metabolic needs elsewhere, resulting in osteopenia or osteoporosis.” This redistribution doesn’t just happen in your bones. “When you are severely malnourished, your body wants to protect itself and will try to break down your organs for fuel in order to save you,” warns Dr. Stephanie Long, a San Francisco-based family physician with One Medical and Fellow of the American Academy of Family Physicians. “When your body doesn’t have the building blocks to function at a basic level, you begin to see significant problems, including menstrual irregularity that can lead to fertility issues, decreased immune function, and complications when recovering from routine surgeries.” Dr. Honaker sums it up: “Whereas a high BMI is mainly unhealthy, a very low BMI is unsafe.”

Why Don’t We Hear About the Risks of Being Underweight?

If having a low BMI is potentially more dangerous than being in the overweight or obese BMI category, why don’t we hear as many messages warning against it? Dr. Brian Bender, PhD, an LA-based nutritionist and co-founder of personalized diet tracker Intake, suggests that, firstly, fewer people are in the dangerously low weight category compared to the number of people who are considered overweight or obese. This means that, although people with low BMIs are also at increased risk of some of the same illnesses as people with high BMIs, doctors are more likely to see them in patients in the latter category, so they tend to focus on high BMI as the cause, without acknowledging that a BMI in the opposite direction is also dangerous.

Another important factor, argues Greg Pignataro, a personal trainer with Grindset Fitness and certified strength and conditioning specialist, is that, “BMI has a borderline shocking tolerance for what is considered ‘normal’ at the lower end of the spectrum. For example, a 5’9″ individual isn’t considered underweight until they hit about 120 pounds. In my professional opinion, that is far too low. I believe it can be detrimental to classify such a low weight as ‘normal’; it sends the message that this is desirable, which can be problematic.” In addition, Dr. Bender adds, one of the most telling outcomes for people with a low BMI was increased risk of self-harm and suicide: “The healthcare system is less adept at dealing with mental-health related risks.” He also points out, “A less likely but still significant reason is that over 70 percent of the low-BMI individuals in the study were identified as women, and health risks related to women and people assigned female at birth have historically been less of a focus.”

What Should We Take From This Study?

Being underweight is, unfortunately, more socially acceptable than being obese, and it’s more likely to garner praise than the kind of abuse often leveled at people deemed overweight. But, while no one should be shamed for their body, it’s certainly not healthy. “As a society, we don’t pay as much attention to the health risks of being underweight,” says Dr. Long. “Being underweight carries chronic stress in the same way as if you’re overweight.”

Although your BMI can indicate your risk of certain health problems, it’s only one measure of health. What many people don’t know is that BMI was never intended as a measure of individual health: It was a formula originally created by a Belgian statistician studying populations as a whole that he based on an ethnically homogeneous sample of white Europeans. “BMI provides us with information about the relationship between height and weight, but it is far from all-inclusive,” agrees Lavy. “It is a good idea to also look at body composition values, including total fat mass. Analyzing lab values, such as blood glucose and hemoglobin A1c [to test for diabetes], as well as individual nutrients such as vitamin D, and looking at an individual’s daily habits — from physical activity to dietary choices — can reveal a lot about someone’s health without emphasis on weight.”

Given the ties between mental health and low BMI mentioned in the study, it’s also important to be aware of attitudes and behaviors around food and weight. “Mental health should be a larger focus of overall health and wellness measurements,” urges Dr. Bender. “Stress, anxiety, and cultural pressures can drive eating disorders that lead to a low BMI or a high BMI. Not to mention, mental health problems can drive morbidity and mortality not associated with BMI at all.” Your health isn’t just about a number: It’s about the emotions and behaviors that drive you to look after or neglect your body. Ultimately, if you feel like your relationship to your weight and your body is out of control, however that manifests, you have the right to have your health concerns taken seriously.

How do you strive to be healthy at every size? Tweet us @BritandCo.