Our Culture of Fat-Shaming Is Literally Making People Sick 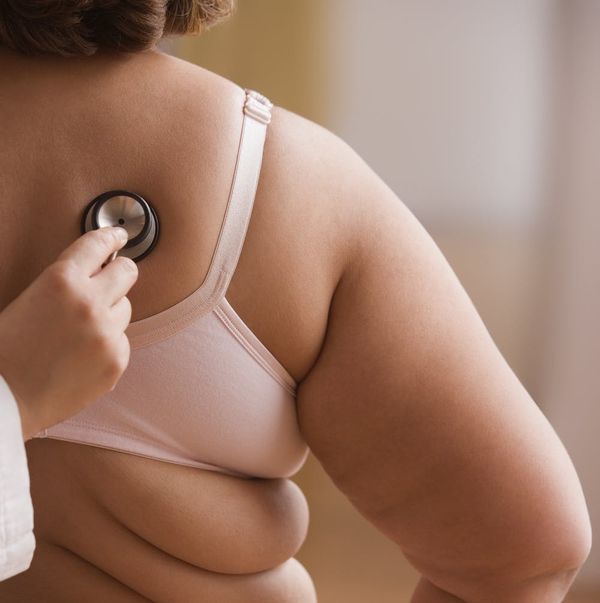 The story around our weight and our health is that if we are heavy, we will be sicker and die earlier from a whole host of diseases. Culturally, we think that being overweight is a sign of weakness, laziness, or sheer lack of desire to be “healthy.” These ideas are drilled into us by doctors, teachers, and often, our own families.

But with overwhelming evidence that our weight alone has little to do with our health, the failure of the medical community to treat fat people with the same dignity and care that slim people are given is leading to negative health outcomes — and that’s something we should all be angry about, regardless of what size we are.

In a viral article published in HuffPost Wednesday (“Everything You Know About Obesity is Wrong“), journalist Michael Hobbes points out that our ideas about weight and health actually have little to do with a person’s size, and more to do with medical stigma around being overweight and obese. One woman interviewed had an eating disorder, but because of her BMI, a doctor told her to keep doing what she’s doing to lose weight; another woman, afraid of a cancer diagnosis, was instead chided by a doctor for the “skinny woman” inside of her trying to get out; a third woman was told at just 16 years old to cut back on fried chicken in order to be healthy while having her health concern (which turned out to be a “dangerously inflamed” bile duct) summarily brushed off.

When discussing our health, doctors often look to our Body Mass Index, or BMI. The formula is simple enough: Take your weight, divide it by the square of your height in inches, and multiply that number by 703. Depending on the answer, you fall into a series of categories between underweight and obese.

The BMI formula was not created by a doctor, but by mathematician Lambert Adolphe Jacques Quetelet. Quetelet developed the formula over 200 years ago specifically to match population data available at that time, and its methods aren’t even statistically sound. Yet, medical professionals continue to use BMI as a rubric of healthiness, shaming and blaming fat people for their size as opposed to looking at overall lifestyle as a key indicator of how healthy they actually are.

In studies, we see that this weight bias makes doctors, in general, less likely to want to spend any time with overweight patients, and less interested in creating positive rapport with them. Erin Harrop, a researcher at the University of Washington, told Hobbes that while thin women with anorexia often get medical and mental health care within three years of their illness starting, for fat women with the eating disorder, the average is 13 and a half years before treatment.

Besides the way fat people are treated by doctors, decades of research prove that being overweight doesn’t actually cause most diseases per se, but it does cause so much medical stigma that fat people — women in particular — are more likely to be ignored by doctors when presenting their symptoms, or they avoid going altogether, leading to higher rates of cervical and breast cancer. And if you are a fat women with an eating disorder, it can take over a decade to get help.

But it’s not just doctors. Insurance company John Hancock announced Wednesday that it will no longer underwrite traditional life insurance, demanding that people who would like to continue their policies use fitness trackers in order for the company to monitor things like food intake and fitness in an attempt to incentivize healthy lifestyles. But taking away someone’s medical insurance based on statistical data isn’t an incentive — it’s a threat.

With all this evidence, you’d think that the medical community would be more invested in fixing the way that we look at weight and health, but new guidelines released by the US Preventive Services Task Force just this week indicate that the medical establishment will continue to favor intense weight loss over sensible lifestyle adjustments as their key determinant for positive health outcomes.

By making sweeping, often inaccurate judgments on someone’s health based on their body size, we’re infantalizing people, and fat women in particular. This should anger everyone, regardless of their size, because at the end of the day, if one group is being stigmatized, we all are.

Kat Armstrong
Kat has been a writer, social media maven and mom for longer than she's willing to admit. She's also spent time in front of and behind the camera, interviewing celebs, politicians and acting as a producer for fashion and artistic photography shoots. When she isn't writing for various orgs and publications, she's hanging with her kids, husband and French Bulldog, Peter, in Toronto, Canada.
Body Positive
Womens Health
Body Positive Controversy Womens Health
More From Womens Health