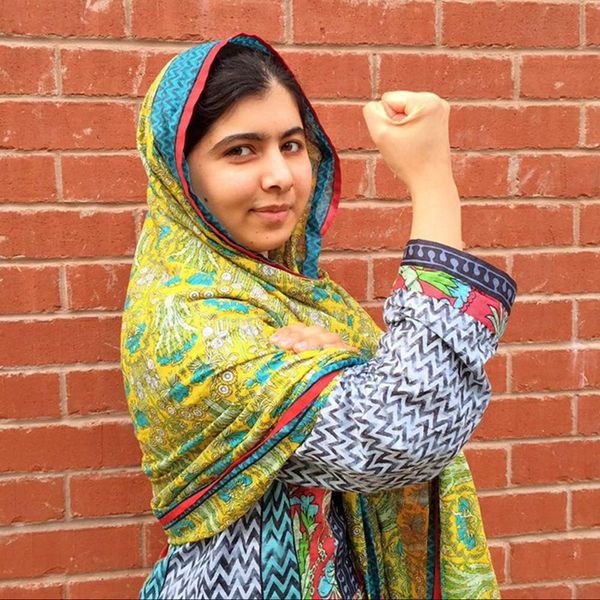 Social media has done more than just give us a creep peak into our exes’ lives; it’s led to so many ways to get your activism on. Whether you participated in last year’s viral sensation for a good cause or are currently snapping a shot of your feet for TOMS, these days there’s always one way or another to get involved in a little feel good social media action to help those that need it. The latest campaign is all about empowering women and fighting poverty in Africa and other countries, with Malala leading the charge.

The #PovertyIsSexist campaign for ONE, an advocacy organization taking action to end extreme poverty + preventable diseases in Africa and worldwide, is being heavily promoted through social media. The nonprofit is tackling extreme poverty by encouraging people to stand up for strong women by taking a #strengthie. The purpose of these unique selfies is to gain awareness worldwide about the injustices occurring in Africa while simultaneously fighting back for women to have an education in these countries.

Activists like Malala and famous ladies like Shonda Rhimes are joining in on the #strengthie movement to help the campaign gain traction as it works toward its ultimate goal — which is twofold. ONE is looking for more signatures on its Poverty Is Sexist petition and gaining some viral buzz along the way. The organization will be presenting world leaders with both assets (signatures + strengthies) before they meet to make crucial decisions that could lead to change for girls + women in the poorest countries of the world. Now that’s strength in numbers.

Get involved with the campaign like Malala, other world leaders and your peers by posting your very own #strengthie to stand #withstronggirls everywhere and tag @ONECampaign to help women around the world get the education they deserve.

Will you be joining the campaign by posting a #strengthie to stand #withstronggirls? Let us know in the comments.