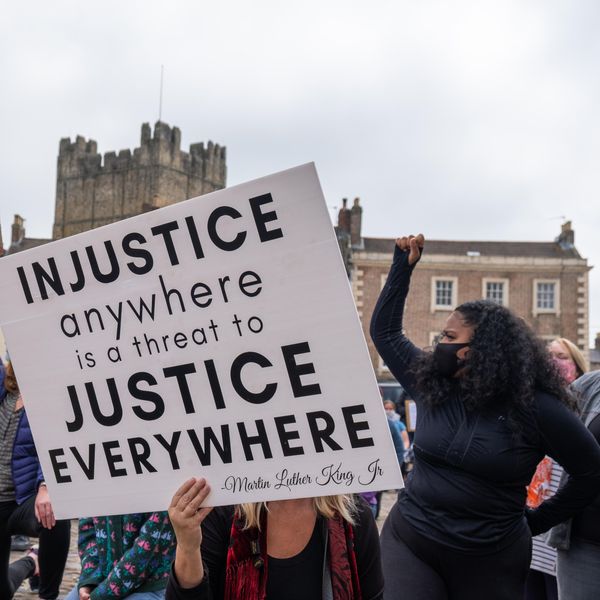 Dr. Martin Luther King Jr.'s birthday has been observed as a national holiday on the third Monday in January every year since 1983 in honor of his legacy as a civil rights leader. Many activists and organizers in the modern civil rights movement continue the work that King and many others started decades ago — and would undoubtedly argue that honoring the renowned activist's work is as important now as ever.

Many writers, activists, organizers, and educators have been outspoken over the decades about the ways in which the legacy of Martin Luther King has been whitewashed, arguing that King's legacy has been used as a political tool for people in power who aren't necessarily committed to King's dream of racial and economic equality.

In 2016, Ijeoma Oluo wrote an essay for The Establishment about the whitewashing of King's legacy, comparing it to Christmas: “Like the creation of the Christmas holiday to pacify, assimilate, and eventually control pagan populations by twisting their sacred truths into brightly colored lies, the narrative of the Martin Luther King Jr. holiday (along with the oversimplified, whitewashed chapters of civil rights history only opened in schools during this week and the month of February) works to distract and weaken Black Americans while strengthening white supremacy."

In 2018, journalist Steven W. Thrasher argued in the Guardian that many of the Republican and Democratic politicians who today quote and speak highly of King would “denounce" him if he were still alive.

“And yet, modern-day Republicans and Democrats often speak as if they love King," Thrasher wrote, “even as they excoriate the real heirs to his legacy: the Black Lives Matter activists and other social justice warriors who fight for racial and economic liberation."

As Pinto points out, at the time of King's murder, he was working on organizing poor and working class people of all races for a campaign called the Poor People's Campaign. King “connected the dots between economic inequality and racism," and advocated against racism as well as capitalism. For Pinto and others, it's of the utmost importance to remember the true legacy of King, and to continue his fight.

Though King was killed more than half a century ago, the Poor People's Campaign, which made a national call for a moral revival following the insurrection at the U.S. Capitol Building this month, still exists today. The campaign states the goal of “uniting tens of thousands of people across the country to challenge the evils of systemic racism, poverty, the war economy, ecological devastation and the nation's distorted morality." In keeping with King, the Poor People's Campaign's mandate embraces a nonviolent approach to civil rights activism, focusing particularly on arts and culture. The website for the Campaign features poetry, music, and visual art that addresses anti-poverty and anti-racist activism.

Though King's messages are now frequently watered down by many who claim to agree with his message and support his civil rights leadership, there are still many (primarily Black) activists who are carrying on the fight King was so instrumental in advancing. Visible in the ongoing Movement for Black Lives, including Black Lives Matter, to the revived Poor People's Campaign is the importance and continued relevance of King's work and life are undeniable.

Though this country has yet to fulfill many of the goals King and his contemporaries fought so hard for, it's evident that the important work of civil rights is still in action — even if there's still a long way to go.

From Your Site Articles
Elizabeth King
Elizabeth King is a politics, history, and culture writer based in the Twin Cities. She is generally pretty cranky but still enjoys traveling, music from the early 2000's, and plotting the resistance. Feel free to say hi on Twitter at @ekingc or check out some of her work at www.elizabethcking.com.
inclusivity
Issues
inclusivity diversity martin luther king jr. mlk day
More From Issues