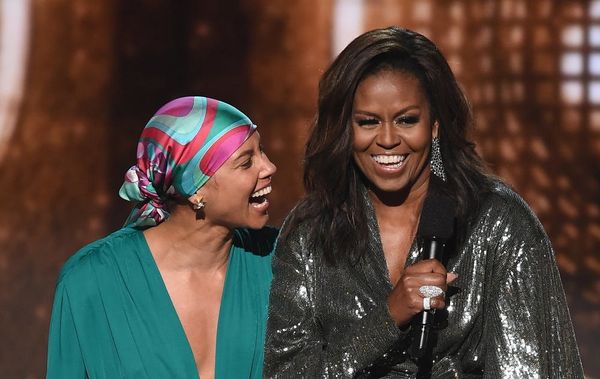 Michelle Obama stole the show with her surprise appearance at the 2019 Grammy Awards, and while the audience cheered so loudly that the former first lady could barely speak, her mom, for one, wasn’t that impressed.

The Becoming author took to Instagram on Tuesday, February 12, to share screenshots of a hilarious post-Grammys text message conversation with her mother, Marian Robinson. “When your mom doesn’t think you’re a ‘real’ celebrity,” Obama captioned the exchange. “Tonight in Phoenix, I shared this text thread from my mom from #Grammys night, and I just had to share it with all of you. #TextsFromMom.”

As seen in the screenshots, Robinson began by writing, “I guess you were a hit at the Grammys,” with a smiling, tongue-sticking-out emoji. Obama replied that the text “is so typically you,” then asked her mom if she watched the show.

“I saw it because Gracie called me,” Robinson responded, before subtly shading her famous daughter. “Did you meet any of the real stars or did you run right after you were done?”

After insisting (despite Robinson’s claims to the contrary) that she told her mom she was going to be on the Grammys, Obama ended the conversation by writing, “I am a real star… by the way…” to which Robinson simply replied, “Yeah.”

When your mom doesn't think you're a "real" celebrity...Tonight in Phoenix, I shared this text thread from my mom from #Grammys night, and I just had to share it with all of you. #TextsFromMom 😂

Obama appeared alongside host Alicia Keys, Lady Gaga, Jada Pinkett-Smith, and Jennifer Lopez at the 61st annual Grammy Awards on Sunday, February 10, to speak about the impact music has had on their individual lives as well as its universal appeal. Obama’s presence in particular inspired a surprised and uproarious reaction from the star-studded audience, who gave a standing ovation and cheered over her when she began to speak.

“All right, you guys, we got a show to do!” she joked to the crowd to settle them. She then spoke about the importance of perspective and storytelling in music — a topic that also came up with regular frequency in her recent hit memoir, Becoming.

“Whether we like country or rap or rock, music helps us share ourselves, our dignity and sorrows, our hopes and joys,” she said. “It allows us to hear one another, to invite each other in. Music shows us that all of it matters — every story within every voice, every note within every song.”

What do you think of Michelle Obama’s mom’s texts? Let us know @BritandCo!