Michelle Obama Just Stole the Show at the 2019 Grammys 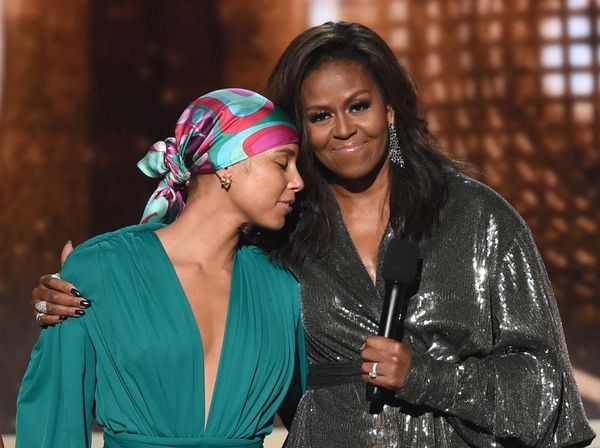 The 2019 Grammys lined up an impressive list of performers, but one of the biggest stars of the night was a non-musician. Less than 10 minutes into the February 10 show, former First Lady Michelle Obama joined host Alicia Keys with Lady Gaga, Jada Pinkett-Smith, and Jennifer Lopez to share how important music has been to all of their lives. The crowd went wild for the entire group, but it was the surprise inclusion of Obama that really brought the house down.

Gaga was the first to speak after Keys introduced the women. “They said I was weird, but music led me to all of you and to my little monsters, who I love so much,” the “Shallow” singer told the audience. Lopez, for her part, talked about how music gave her a reason to dance during her childhood in the Bronx, and Pinkett-Smith added that every voice “deserves to be honored and respected.”

When it was Obama’s turn, the crowd erupted into wild applause and cheers, drowning out her first few words. “All right, you guys, we got a show to do!” she quipped to quiet them down.

Once the cheering subsided, she shared her own personal connection to music. “From the Motown records I wore out on the South Side to the ‘Who Run the World’ songs that fueled me through this last decade, music has always helped me tell my story, and I know that’s true for everybody here,” she began.

“Whether we like country or rap or rock, music helps us share ourselves, our dignity and sorrows, our hopes and joys. It allows us to hear one another, to invite each other in. Music shows us that all of it matters — every story within every voice, every note within every song.”

After her surprise appearance, the Becoming author took to Twitter, writing, “A big part of friendship is showing up for your girls — that’s why I was thrilled to be there for the one and only @aliciakeys at the #GRAMMYs. She is one of the most genuine and thoughtful people I know — there’s no one better to help us all celebrate the unifying power of music!”

Last year’s Grammys were mired in controversy after women were shut out of almost every major category. This year, the Recording Academy seems determined not to repeat the mistakes of the past.

Kat Armstrong
Kat has been a writer, social media maven and mom for longer than she's willing to admit. She's also spent time in front of and behind the camera, interviewing celebs, politicians and acting as a producer for fashion and artistic photography shoots. When she isn't writing for various orgs and publications, she's hanging with her kids, husband and French Bulldog, Peter, in Toronto, Canada.
Awards Shows
Music
Awards Shows Grammy Awards
More From Music