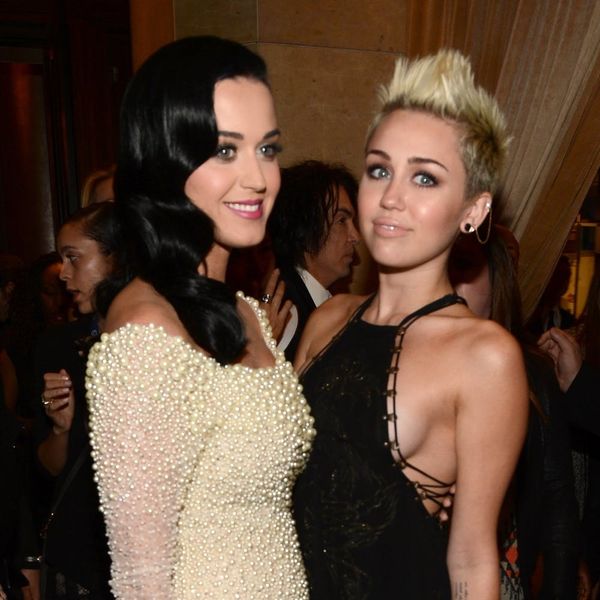 Miley Cyrus may currently be competing with Katy Perry’s “Bon Appetit” (which had fans spraying themselves in the face with water) for a top spot on the music charts for her (Liam Hemsworth-inspired) single “Malibu,” but there’s no “bad blood” between these two (sorry, Taylor Swift!). In fact, the two singers happen to be longtime friends, with Cyrus recently revealing what sparked their nearly decade-long relationship. Frankly, the reason the 24-year-old first developed a girl-crush on Perry is probably the same reason you did too.

Chatting with the hosts over at WKTU, Cyrus said that it all had to do with Perry’s first hit tune back in 2008, “I Kissed a Girl.” “When [Perry] came out with ‘I Kissed a Girl,’ I was doing the Hannah Montana movie, and I heard her on the radio,” Cyrus explained. But it wasn’t the awesome beats that had her giddy. According to the Last Song star, “They said, ‘Who did you write that about?’ She said me! … I heard it and I screamed, and started freaking out.” Despite the fact that both women have been admittedly open about being attracted to the opposite sex, with Cyrus coming out as pansexual and Perry revealing she’s done “a lot more than kiss a girl,” the 32-year-old didn’t mean it in the literal sense: The two had never even met. That is, if she ever meant to say Cyrus at all.

According to NME, during an interview with Steppin’ Out magazine that same year, Perry told an entire story about the song, saying, “‘I Kissed a Girl’ was inspired when I opened up a magazine and I saw a picture of Scarlett Johansson.” She continued, “I was with my boyfriend at the time, and I said to him, ‘I’m not going to lie: If Scarlett Johansson walked into the room and wanted to make out with me, I would make out with her.’” So, either Katy Perry was mixed up or there’s more than one gal behind the singer’s mega-hit.

Still, it wasn’t long afterwards that a 15-year-old Cyrus was asked by Perry to be her date to that year’s MTV VMAs (though mama Tish insisted on chaperoning the limo drive).

Cut to 10 years later, and the two are still bosom buddies, hanging out as recently as last weekend for Wango Tango. “We were actually just realizing the other day that next year, we’ll have been friends for 10 years. I think that’s my friend that I’ve known the longest. Which is really, really weird!” (Weird? Perhaps. But still wonderfully awesome.)

Whatever the real story is, it doesn’t change the fact that the song helped sparked one of Hollywood’s most enduring (and quirky AF!) friendships.

How did you first meet your oldest friend? Let us know @BritandCo!

Desiree O
Desirée O is a ‘Professional Bohemian’ who loves anything and everything related to the arts, entertainment, and pop culture. She ADORES being a ‘Newsy’ for Brit + Co, covering all of the latest tidbits of awesomeness that you want to read about. When she’s not writing, she’s either making messy art, going on long adventurous walks with her camera, or poking around over at bohemianizm (http://www.bohemianizm.com/). You can find out about Desirée O and her work at http://DesireeO.com/ or follow her on Twitter @DesireeO.
Katy Perry
Celebrity News
Katy Perry Miley Cyrus
More From Celebrity News