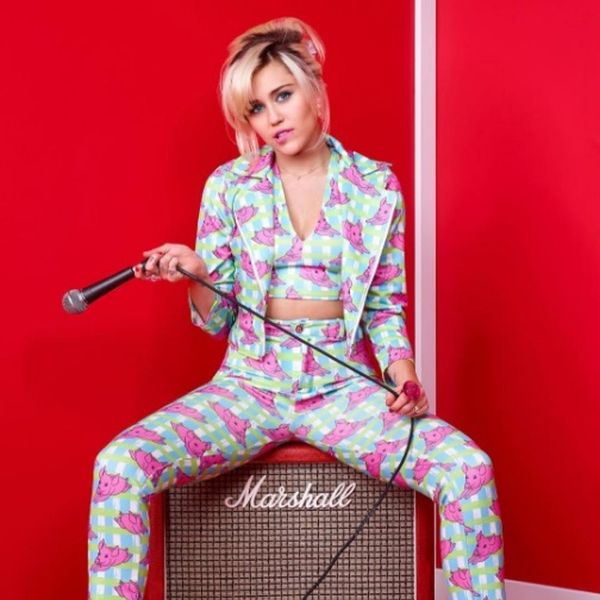 Miley Cyrus isn’t exactly known for being shy, but that doesn’t mean it still doesn’t take a certain degree of braveness to be totally honest at times. She obviously makes it one of her utmost goals in life to be upfront and open with her fans, and Miley has just made a bold confession on National Coming Out Day. Not only was her first relationship NOT with Nick Jonas when she was just 13 years old, as many believe, but it was actually with a girl.

Though Miley has been open in the past about her sexuality, this is the first time she’s talked about her relationship with another girl when she was younger. In a new interview with Variety, Miley admits, “My whole life, I didn’t understand my own gender and my own sexuality.”

That all changed when she was 10 or 11 years old. “My eyes started opening in the fifth or sixth grade. My first relationship in my life was with a chick.”

Though she doesn’t reveal who this gal was (rightfully, as they were just kids and it’s a private sitch), she does acknowledge that this revelation doesn’t mean she’s gay. Nor does the fact that she’s engaged to Liam Hemsworth mean she’s straight. And if you’re thinking bisexual, that doesn’t quite work for Miley either.

“I think the LGBTQ alphabet could continue forever,” Miley says. “But there’s a ‘P’ that should happen, for ‘pansexual.’” That’s how Miley feels most comfortable defining herself, as someone who is attracted to a person regardless of their gender identity.

Keep that open vibe going, Miley! And to everyone else celebrating National Coming Out Day, we totally support you!

What do you think about Miley revealing that her first relationship was with a girl? Tweet us @BritandCo!

Desiree O
Desirée O is a ‘Professional Bohemian’ who loves anything and everything related to the arts, entertainment, and pop culture. She ADORES being a ‘Newsy’ for Brit + Co, covering all of the latest tidbits of awesomeness that you want to read about. When she’s not writing, she’s either making messy art, going on long adventurous walks with her camera, or poking around over at bohemianizm (http://www.bohemianizm.com/). You can find out about Desirée O and her work at http://DesireeO.com/ or follow her on Twitter @DesireeO.
LGBTQ
Celebrity News
LGBTQ