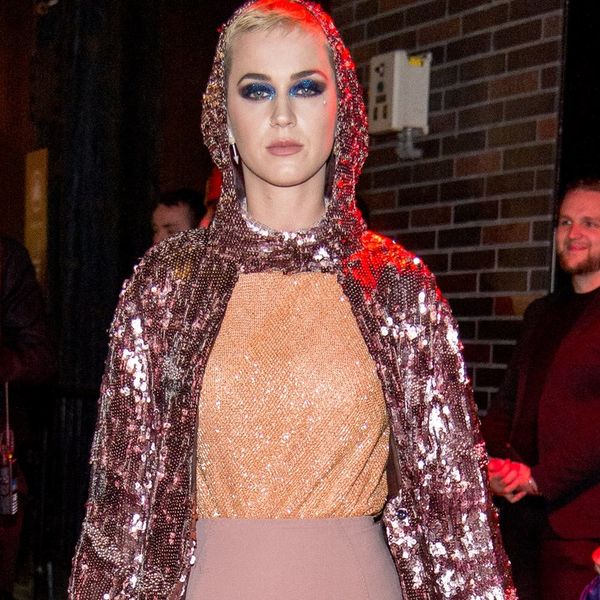 Katy Perry’s new video for her new single “Bon Appetit” dropped today, and if you haven’t seen the racy vid (which begins with a NSFW disclaimer), you’ll likely be all kinds of confused about why your social media feed is suddenly filling up with people dousing themselves with water.

Featuring a latex bodysuit-clad Perry being prepped for dinner as if she were a food dish, boiled in a pot, and covered in all kinds of edibles, the video has the 32-year-old singer now inviting her fans to take a walk in her (namesake) heels with a challenge to follow her World’s Best Cherry pie contest. Say hello to the #BonAppetit challenge — a call for her legions to douse themselves in the face with water, to put it bluntly.

Despite having already done the hard work in her vid, Perry herself took the challenge on social media, maintaining a face of stone while being pelted with H20.

“Do you have what it takes to look like a *star emoji * while being hit/soaked/sprinkled with water!?” she wrote. “Can you hold your composure like a pop star being spritzed? Show me your #bonappeitchallenge (AKA pour some water over your face AKA poor man’s Bucket challenge AKA just look sexy while playing #BonAppetit.”)

As absurd as the request may seem, Katy cats the world over are actually listening, getting soaked to the bone at their queen’s behest, and the results? Are kindddd of hilarious. Check out some of the best ones we’ve seen thus far below.

1. Frigid Shock: This fan clearly didn’t test her water temp before dumping her bottled water over her head, as the shock of the cold water hitting her skin is written all over her face. “Here I am, embarrassed myself, again, just for you mom!”

@katyperry heres my #BonAppetitChallenge where I lay in a bath and turn a tap on over my head all for you and yes I forget how to turn it on pic.twitter.com/fUs0zeyAhh

2. Bathtub Faucet Antics: This gal got creative, forgoing sprinklers, shower heads, and water cups and just going straight for it under the bathtub faucet.

3. Sexy Penguin: Talk about a sex pot! Lauren got all dressed up in her finest penguin suit to do the challenge.

4. “I got the flu:” Lucas maintained a deadpan gaze while telling his muse that he “got the flu” over her challenge.

Tag us in your funniest #BonAppetit challenge vid @BritandCo.

Nicole Briese
Nicole is the weekend editor for Brit + Co who loves bringing you all the latest buzz. When she's not busy typing away into the wee hours, you can usually find her canoodling with her fur babies, rooting around in a bookstore, or rocking out at a concert of some sort (Guns N' Roses forever!). Check out all her latest musings and past work at nicolebjean.com.
Music
Celebrity News
Music social media
More From Celebrity News