Millennials Are Now Buying Homes for *This* Totally Unexpected Reason 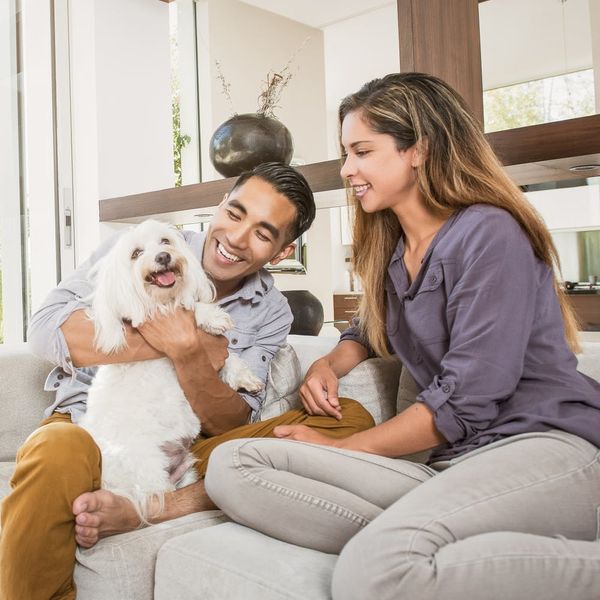 We already knew that millennials had a rather unique relationship with real estate compared to generations past: Unlike those that came before them, the younger set has been refraining from buying homes in recent years due to lack of knowledge about financial options (at least according to a 2016 study from NerdWallet). Now, we’ve gotten even more insight about the factors that are influencing them to take the plunge, courtesy of a new study from SunTrust Mortgage, and one of their top three cited reasons may surprise you.

Rather than being concerned with space for themselves or their growing families, SunTrust says that it’s actually pets that are convincing young homeowners to pull the trigger to buy. The company, who polled 412 adults between the ages of 18-36 (248 of which were first-time home owners), found that 33 percent, or roughly one third of participants, said that the desire to have better living quarters for their dogs influenced their decision to purchase. What’s more, 42 percent of those who hadn’t yet purchased property also had Fido in mind, citing their dog or a desire to have one, as a top decision-making factor.

These percentages put pet ownership above major life events including both marriage and the birth of a child, making it crystal clear that pets have a very heavy influence on their owners’ buying behaviors.

It was a fact that wasn’t too surprising to SunTrust Mortgage President and CEO Dorinda Smith, who noted, “Millennials have strong bonds with their dogs, so it makes sense that their furry family members are driving home-buying decisions.” She added, “For those with dogs, renting can be more expensive and a hassle. Home ownership takes some of the stress off by providing a better living situation.”

So how is this affecting the market overall? According to Smith, we’re seeing a shift from last year’s reports, which stated that more and more millennials were opting to rent over buy. “Millennials are trending toward home ownership,” she said. “Demand among millennial-aged, first-time buyers is robust, and we expect them to continue adding strength to the housing market.” Huh!

Sounds like our four-legged friends will soon have a lot more room to run around and we’ll all soon be a whole lot cozier to boot — it’s a win-win!

Do your pets influence your living decisions? Let us know @BritandCo.

Nicole Briese
Nicole is the weekend editor for Brit + Co who loves bringing you all the latest buzz. When she's not busy typing away into the wee hours, you can usually find her canoodling with her fur babies, rooting around in a bookstore, or rocking out at a concert of some sort (Guns N' Roses forever!). Check out all her latest musings and past work at nicolebjean.com.
Dogs
Home News
Dogs