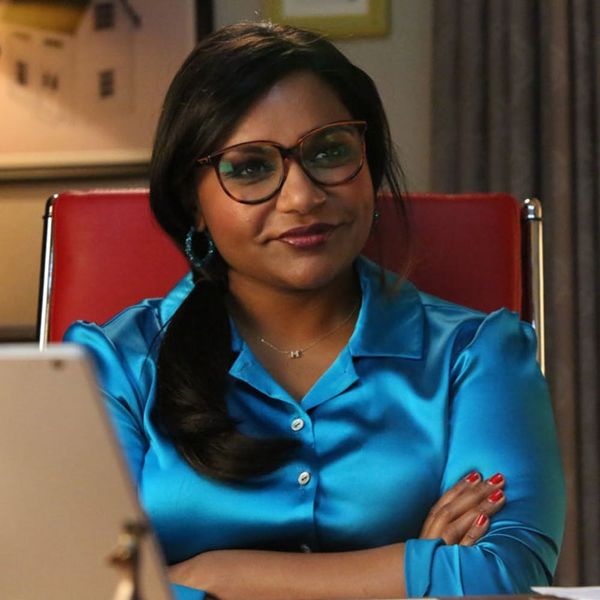 If you haven’t been watching Season 4 of The Mindy Project, you need to find a comfy seat and binge watch it on Hulu, because it has been quite a ride. We went from seeing Dr. Mindy Lahiri as a new mom with partner Dr. Danny Castellano to a now-single mom exploring the world of dating again while running her own fertility clinic. It’s a lot of change! But one thing that has remained constant is Mindy’s fabulous style, which has only evolved with her character thanks to the genius of the man outfitting her, Salvador Perez.

The Emmy award-nominated costume designer for the series and president of the Costume Designers Guild chatted with us more about the inspiration behind the doc’s look. “Mindy went into casual mom style for the first part of the season, so we really went very fashion-y for the second half of the season. We have had so much fun with some bold statement pieces and a lot more custom clothing. It’s been a fashion show every episode. On our first episode back after the break, Mindy had 31 changes!” Whoa. But don’t expect Mindy’s signature bright colors and bold prints to go anywhere. “It’s more of the bold colors and mixed prints we all love, but a little sexier, as being a mom has brought a whole new level of confidence to Mindy,” said Perez. The result: more designer fashion along the lines of Dolce and Gabbana, Moschino, Milly, Roland Mouret and Etro. “With lots of Ben Amun Jewelry,” Salvador added.

Perez, who also designs and produces custom outfits for Mindy Kaling, says the actress is loving this new look. “Mindy loves fashion, and we have been having so much fun finding new pieces to add to her closet,” he told us. He even gave us a little costume spoiler for the season finale! “There is a fabulous Dolce and Gabbana lemon-print dress with a matching bag coming up that I am obsessed with, and in the season finale, she has a custom coat and dress that I am so proud of. Every day on this show is like a gift; I have the best design job ever!”

Speaking of coats, last year Perez launched a coat line for Gilt inspired by Mindy Lahiri. Though he had done jewelry collaborations with BaubleBar before, the Gilt collection was Perez’s first Mindy-inspired clothing collab — and coats were a natural place to start. Since the pilot, fun, colorful, patterned coats have been a key element of Dr. Lahiri’s style. Not surprisingly, the line sold out within minutes. But never fear: There might be more where that came from.

“I am looking for a new collaboration to bring more of Mindy’s style to the market,” he said. While we don’t know for sure, Salvador did recently tell InStyle.com that a Mindy-inspired pajama line could be in the works. A cocktail dress line is also possible… and we KNOW the girl knows how to work a sparkly LBD.

As for any spoilers for the rest of the season, Perez stayed pretty mum, but definitely gave us something to look forward to. “All I can say is — dream closet!” Sounds good to us.

What Mindy-inspired fashion collections would you like to see? Tell us @BritandCo!

Meredith Lepore
Meredith is a freelance writer/editor who writes for Levo League, Bustle, Refinery 29, Instyle.com as well as magazines including Marie Claire, SELF, Women's Health and Cosmopolitan. Before going freelance she was Editor in Chief of the women's career site The Grindstone. She earned her Masters in Magazine, Newspaper and Online Journalism from the Newhouse School at Syracuse University. Meredith resides in New York full time and enjoys SoulCycle, jogging and playing with her Yorkshire Terrier Otis, who also loves SoulCycle.
Coats
Pop Culture
Coats
More From Pop Culture