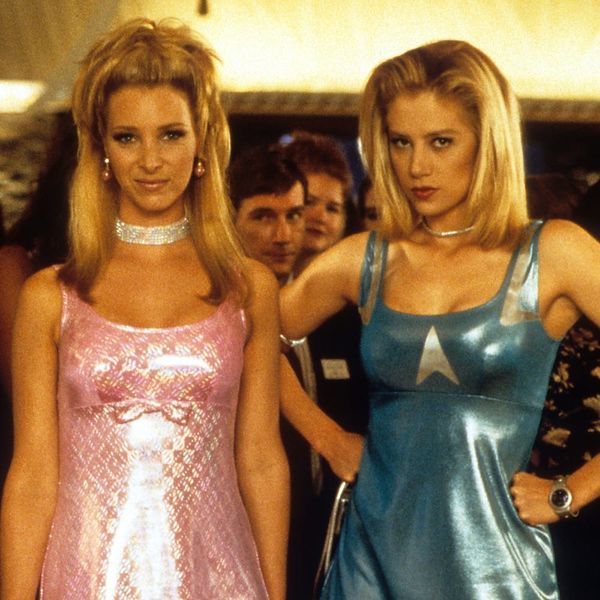 It’s been more than 20 years since best friends Romy and Michele headed back to school, bringing us endless laughs, bold style inspiration, and one of the most epic dance scenes in movie history. Now, one of the film’s stars, Mira Sorvino, has expressed interest in making a sequel to the flick.

Released back in 1997, Romy and Michelle’s High School Reunion starred Sorvino as Romy and Friends star Lisa Kudrow as her bestie Michelle. When the two are invited to their 10-year high school reunion, they realize their lives might not impress their former classmates, so they make up fake careers and ditch their club clothes for business-wear. In the end, though, they realize they’re fabulous just the way they are.

Now that two decades have passed, Sorvino thinks it could be time for Romy and Michelle to have another reunion. “I would be so into it,” Sorvino told IndieWire at the Television Critics Association 2018 winter press tour. “Let the powers that be that would control the possibility of it happening decide to do it. Let’s make a sequel.”

There’s no doubt that fans would be into it. Though it saw modest success while in theaters (taking in $30 million domestically), the original movie has continued to build a cult following over the years. Sorvino said that when she attended a special 20th anniversary screening in LA last year, “they had this amazing prom party with all these balloons. They played all this ’80s music and had a dance party. It was so much fun.”

She added, “The audience had such an overwhelmingly positive response when we walked out that I felt for the first and only time in my life what it must feel like to be a rock star. There was this wave of standing ovation and screaming for several minutes for me and Robin [Schiff, the script writer], and we were like, ‘Oh my god, thank you. This is incredible.'”

And she thinks she knows why fans adore the story as much as they do. “There’s such an enduring love for those characters — the geek underdog, girl best friend heroes,” she told IndieWire. “I think that means a lot to people. I think it struck a real nerve for anyone who was ever in a difficult spot in high school or beyond. The power of friendship is the power of being yourself, but also being ridiculously stupid and funny about it all.”

Recently, Sorvino has been dealing with something decidedly less humorous — the revelation that disgraced Hollywood heavyweight Harvey Weinstein allegedly attempted to derail her career after she rejected his advances. Despite that, she’s managed to work regularly throughout the years, appearing on shows including Will & Grace, House, and Lady Dynamite. Next, she’ll join William Hurt, Brendan Fraser, and Bob Balaban in Condor, which premieres in June on the Audience Network.

Hopefully, we’ll also see her someday in a sequel to Romy and Michelle’s High School Reunion!

Would you like to see a Romy and Michelle’s High School Reunion sequel? Let us know @BritandCo!