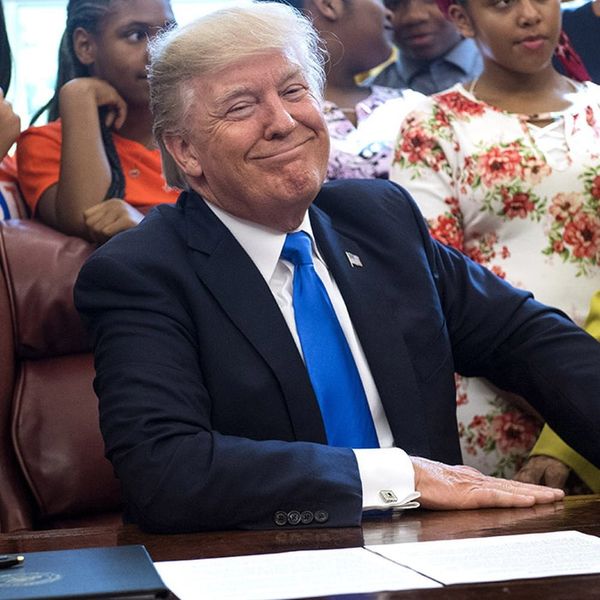 Ever since millions of women marched on Washington in pink hats, the fight for women’s reproductive rights has raged on. We’ve had some wins (ahem, a blockage of Trumpcare two times over), but this past weekend we were just dealt a hefty blow.

On Friday, President Trump rescinded the Obama-enacted law which demanded employers provide FDA-approved contraception at no cost to employees through company-provided medical insurance.

Trump and his team believe Obama’s law was unfair to religious groups who feel morally opposed to birth control. House of Representatives Speaker Paul Ryan told Reuters, “This is a landmark day for religious liberty. Under the Obama administration, this constitutional right was seriously eroded.”

Here’s what you need to know and what you can do if this affects you and your access to birth control.

The new regulation applies to nonprofits, private firms, and publicly traded companies. As mentioned above, the main reason behind the change in law is placed under the guise of “religious freedom.” But here’s the thing: The Department of Health and Human Services also states that organizations and small businesses that have objections “on the basis of moral conviction which is not based in any particular religious belief” can also deny this coverage. Basically, if your employer decides they’re “morally opposed” to giving you coverage, you could be out of luck.

The change could make an estimated 22.7 million women ages 18 to 44 vulnerable to losing access to contraceptive coverage. This is a big step backward for women’s health care, but President Trump is far from progressive on the women’s health front. Neil Gorsuch, the Supreme Court Justice he nominated earlier this year, is famous for a case in which he ruled in favor of this exact argument. You can read more details on that case here.

When does this go into effect?

This law is effective immediately. That means if your company opts out and your birth control pack is about to run out, you need to know where else to look or be prepared to pay more.

How do I know if I’m not covered anymore?

Employers who wish to claim an exemption from the contraceptive coverage mandate are not required to file any paperwork with the government. However, they are required to inform their employees of the change.

If you haven’t received a notice, chances are you’re in the clear. But if you’d like to be sure, we’d advise sending a note to your HR rep to confirm.

Where can I go if my company doesn’t cover my birth control now?

If you belong to one of the few organizations taking advantage of this rollback, you’re not out of luck. We advise first calling your local Planned Parenthood to see if you’re eligible for contraceptive care through them. If not, the Reproductive Health Access Project and Bedsider can point you in the right direction for free or affordable birth control.

IS ANYTHING BEING DONE TO FIGHT BACK?

Yes. Like most of Trump’s controversial moves, the legislation is being fought with lawsuits by a handful of organizations. So far, the ACLU, the National Women’s Law Center, the Center for Reproductive Rights, and the office of California Attorney General Xavier Becerra have filed suits.

Like the initial travel ban, if any of them are successful and a federal judge overrules Trump’s order, the law could be temporarily (and potentially permanently) reversed.

As an individual, you can fight back by calling your representative and letting them know where you stand on the issue. This isn’t a bill that can be defeated but letting your government know what you think could help carve new ways around this roadblock and paths to free birth control.