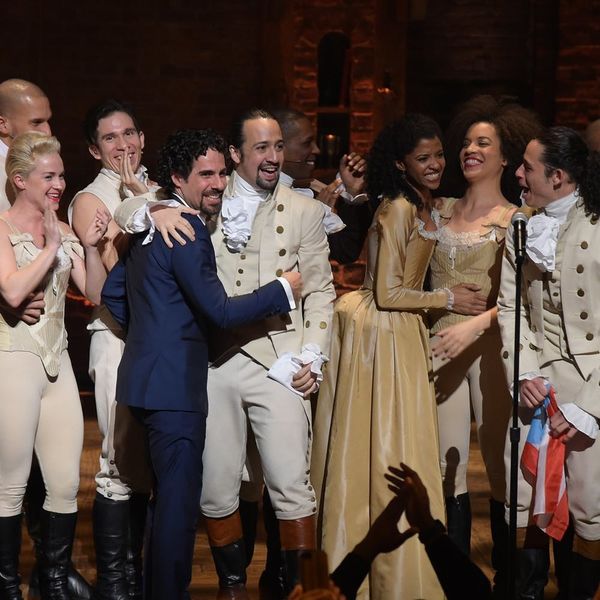 Presidential politics: So hot right now. The never-ending nomination campaign seems to be all anyone can talk about, considering it has had its share of upsets and surprises worthy of any reality TV program. We might say this larger-than-life political mythology is a symptom of our modern era, but the truth is, politics have never been particularly fascinating, and there are all sorts of narratives throughout history of the people who were in the room where it happened. This week’s book club features stories of a Founding Father, a president and a number of First Ladies. These new books connect our past to our present, from Hamilton to Hillary, and show us that history is happening.

1. Hamilton: The Revolution by Lin-Manuel Miranda and Jeremy McCarter ($24):

It’s probably not an overstatement to say that the musical Hamilton, which blends everything from Broadway to Britpop to hip-hop and rap in telling the story of America’s first Secretary of Treasury Alexander Hamilton, “the ten-dollar Founding Father without a father,” has provoked an enormous reaction (revolution?) in both musical theatre and the nation’s interest in its own story. It’s been remixed and parodied with every pop culture franchise under the sun, spurred large numbers of donations to the orphanage originally founded by Hamilton’s wife, and convinced teenagers that doing research with primary sources is cool. Hamilton: The Revolution chronicles the making of a show about history which subsequently made history.

Previously of most interest either from his appearance on the $10 bill or in a famous commercial for milk (Picture “Aaron Burr!” being said through a mouthful of peanut butter; now picture Burr, played by the awesome Leslie Odom, Jr., narrating the show about his life’s rival), Hamilton’s story has recently been brought to national consciousness by Lin-Manuel Miranda, winner of the MacArthur Genius Grant. The musical tells of Hamilton’s meteoric rise from penniless orphan and immigrant to his corresponding rise in hubris and fall based on his all-too-human faults.

Hamilton: The Revolution takes readers from the musical’s beginnings (in “mixtape” form) at the White House to its opening night on Broadway, with the show’s reference-packed (and footnoted) libretto, behind-the-scenes photos, and stories from more than 50 people involved. Even President Obama (one of the show’s biggest fans) turns up. You can’t get a ticket to see Hamilton for at least a year, but you don’t have to wait for it — read this book.

2. Most Blessed of the Patriarchs: Thomas Jefferson and the Empire of the Imagination by Annette Gordon-Reed and Peter S. Onuf ($18):

Though eventually endorsing his Presidential run, Alexander Hamilton reportedly disagreed with Thomas Jefferson about nearly anything; in the show, Thomas Jefferson is played by the super hot and talented Daveed Diggs (go on, look up his performance of “What’d I Miss,” and you’ll wish that you both were messing around in France). One of the goals of the breakout musical is to humanize characters thought of as larger-than-life or austere. Jefferson is one of these – heck, our current reference point to the man is literally made of stone, his enormous mug carved into a mountain.

In Most Blessed of the Patriarchs: Thomas Jefferson and the Empire of the Imagination, Annette Gordon-Reed and Peter S. Onuf also seek to fight Jefferson’s reputation as an unknowable man or cliché. They use meticulous research to create a way balanced “self-portrait” of Jefferson, exploring the man’s mysterious contradictions. The biggest of these is his status as a passionate voice for freedom while also being a slave-owner, a “strong proponent of republican values, adherent of the Enlightenment,” who “likened himself to a figure from ancient times” that was more autocratic than a champion for the downtrodden. Nuance, contradiction, and balance in politics? OMG.

Jefferson wrote only that all men were created equal, but as Elizabeth Schuyler Hamilton demonstrates, the woman at the side of the famous and powerful man may be just as passionate and interesting as, if not more than, her husband. It’s not just a job comprised of baking cookies and hosting diplomats; First Ladies, particularly those of the modern era, are brilliant and accomplished professionals in their own right, writers, orators and policy-changers (and now, even in the running for the top job itself).

Former White House correspondent Kate Andersen Brower’s previous bestseller, The Residence, took a behind-the-scenes look at the famous building itself, but now she devotes herself to the ten women (#girlbosses) who have led that household since 1960, from Jacqueline Kennedy (who was only 31 when she got the job) to Michelle Obama. Brower gives us a picture of the women’s relationships with their husbands, friendships with each other, and stewardship of the nation.

Through over 200 interviews, Brower explores the position of a woman who is “constitutionally required to be perfect” – in the words of Lady Bird Johnson, a “showman and a salesman, a clotheshorse and a publicity sounding board, with a good heart, and a real interest in the folks.” NBD, right? Post-1960, in the era of television and mass scrutiny, there is no place to hide at 1600 Pennsylvania Avenue, described by more than one First Lady as “a really nice prison.” The women, “often beloved, sometimes vilified,” still find that this instant celebrity by marriage comes with its own “covert power;” as Rosalynn Carter said, “you can do anything you want to.”

Brower takes us through Kennedy’s campaign to fund the arts and preserve historic buildings, Betty Ford’s support for the Equal Rights Amendment, Rosalynn Carter’s role in the Camp David Accords, and Obama’s campaign to end childhood obesity. As we head forward to the next four years, and maybe the first First Husband, it’s a good time to take a good look at the women behind the White House.

What book’s pages are you flipping right now? Tell us on @britandco.

Ilana Lucas
Ilana is an English professor, theatre consultant and playwright based in Toronto, Canada. When she’s not at the theatre or insisting that literary criticism can be fun, she’s singing a cappella or Mozart, occasionally harmonizing with the symphony, or playing “Under Pressure” with her rock handbell group, Pavlov’s Dogs.
Home News