This No-Knead, 5-Ingredient Artisanal Bread Is Super Easy to Bake 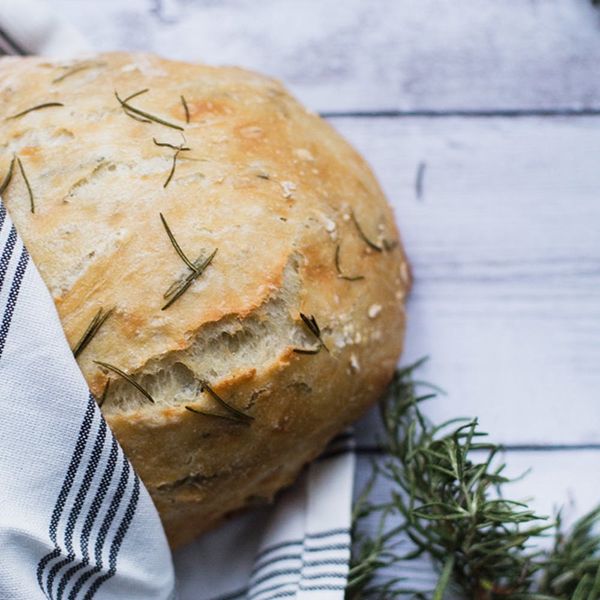 We’re serious. You can bake fresh, crusty, aromatic, artisanal bread using just FIVE ingredients. It doesn’t involve any kneading and takes less than 10 minutes of prep! We’ve always thought that baking bread was intimidating, but this recipe is a great way to dip your toes in the water. With only five ingredients (plus water), this rosemary sea salt bread is easy to prepare and even easier to eat! Let’s get baking!

*Note: Since there are only a few ingredients, we recommend getting the freshest and highest quality products you can.

1. In a large bowl, mix together the flour, kosher salt, yeast and rosemary. Incorporate the water using a wooden spoon, making a shaggy dough that’s blended. Be careful not to over mix the dough. If you over mix it, it’ll be less fluffy. Just combine it enough so it’s cohesive.

2. Tightly cover the bowl with plastic wrap. We recommend using press ‘n’ seal since it seals better than other wraps.

3. Let the dough rise at room temperature for 24 hours. If you can’t wait that long, make sure it has at least eight hours to rise. You’ll know it’s ready when it has small bubbles.

3. After it’s done rising, preheat your oven to 450 degrees Fahrenheit. Heat your Dutch oven in the oven for 30 minutes.

5. When the Dutch oven is ready, put the dough inside and sprinkle the top with sea salt. Cover the bread and bake for 30 minutes. Remove cover and bake for another 10-15 minutes uncovered until the crust is nice and brown.

Add a little bit of butter and take a bite!

What other flavors would you add to this bread? Share your ideas in the comments!

Nanette Wong
Nanette is an all around food enthusiast who loves transforming basic everyday foods into something delicious, and of course, full of sprinkles. You can see more of her at www.nanettewong.com.
Breakfast Recipes
DIY Recipes
Breakfast Recipes
The Conversation
Reviews:
More From DIY Recipes