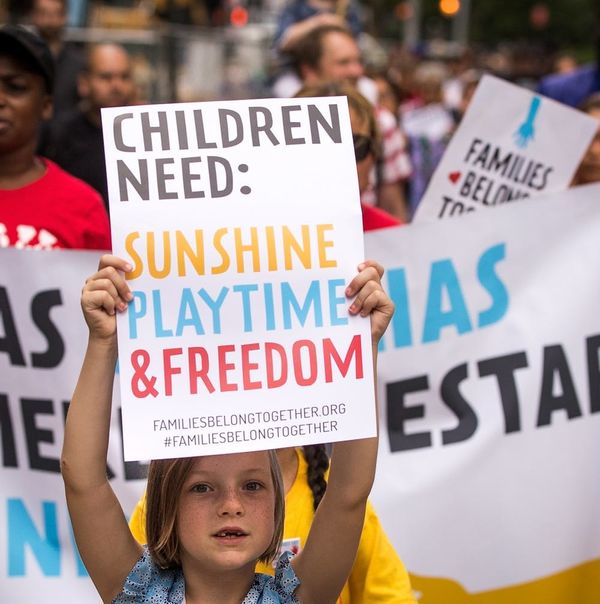 For weeks, much of the American public has been up in arms over the Trump administration’s “zero tolerance” immigration policy and ensuing family separations at the US-Mexico border. The backlash to the “zero tolerance” policy and the jailing of immigrant children has brought new attention to family separations at the southern border. In light of increased activism around family separation and ICE detention, the Immigrant Defense Project has joined forces with the Center for Constitutional Rights to launch ICEwatch, a new project that aims to hold ICE accountable for overstepping its bounds both at the southern US border and throughout the country.

Released July 23, ICEwatch is an interactive map that plots ICE raids in New York, New Jersey, Connecticut, Pennsylvania, Georgia, Louisiana, Texas, and Michigan. “For the purposes of this map, we have defined a raid as any instance where ICE agents arrest, or attempt to arrest, a non-citizen,” reads the description on the ICEwatch Raids Tactic Map. The nearly 700 ICE raids plotted on the map include those that have taken place during the Trump administration in addition to raids that were documented within the last five years of the Obama presidency.

The map also goes into some detail about the tactics ICE agents use during raids and arrests with the goal of identifying patterns in the way ICE carries out its duties. While the map’s data does clearly show an increase in ICE abuses during the Trump era, it also gives a window into the years of family separations, detentions, and deportations that preceded Trump. While ICE has carried out surveillance, raids, arrests, and detentions since it was created under George W. Bush, ICE raids have increased significantly in the Trump era. According to the Pew Research Center, ICE arrests increased 30 percent in 2017 compared to 2016.

In addition to showing where ICE has carried out raids, the ICEwatch map also includes stories from people who have been the target of abuse. These stories all shed further light on tactics used by ICE as well as the horrifying threats ICE poses to immigrant communities.

Genia Blaser, a senior staff attorney for the Immigration Defense Project, tells Brit + Co that an “examination of ICE tactics provides a window into the human rights violations that occur under an agency that relies on criminalization and fear-mongering to forcibly remove and exile as many immigrants as possible from their families, communities, and the lives they have built.”

The map comes amid a growing movement against the US government’s cruel immigration policies, particularly policies used by the Trump administration. Activists in several cities have set up encampments at or near ICE facilities in protest of ICE detention and family separation. Over the past few months, there have also been a series of rallies, vigils, and protest marches aimed especially at the family separation policy.

ICEwatch is one of many ongoing projects run by the IDP in support of immigrant rights. “IDP is committed to fighting back against the Trump administration’s efforts to criminalize immigrant communities and deport millions of people,” Blaser says. “Under Trump, we’ve seen not only an increase in the number of raids, but also a demonstrable increase in the level of cruelty in ICE’s enforcement tactics.”

Blaser also says that learning more about ICE abuses and sharing the stories of people who face them can be a powerful form of activism. “[People] can help by amplifying these powerful stories and educating themselves and their communities about the escalation of ‘unshackled’ ICE policing,” Blaser tells us. “Each one of the thousands of individuals arrested through home, community, and courthouse raids represents a loved one violently torn apart from their family and community, and we are dedicated to ending these cruel and inhumane practices.”

Elizabeth King
Elizabeth King is a politics, history, and culture writer based in the Twin Cities. She is generally pretty cranky but still enjoys traveling, music from the early 2000's, and plotting the resistance. Feel free to say hi on Twitter at @ekingc or check out some of her work at www.elizabethcking.com.
Activism
Current Events
Activism Controversy Immigration Politics
More From Current Events