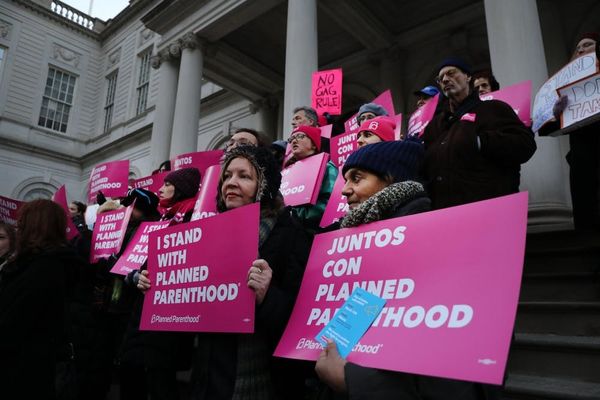 Last month, the Trump administration publicly revealed a new rule that effectively slashes federal funding for organizations such as Planned Parenthood. The rule, which was finalized on Monday, forbids clinics that provide or refer patients to abortion care services from receiving Title X funding, which could have devastating effects for Title X patients and providers alike. So on Tuesday, March 5, Planned Parenthood announced that it is fighting back with a lawsuit.

So we’re suing w/ @AmerMedicalAssn to fight back on behalf of our doctors, nurses, and patients. #NoGagRule pic.twitter.com/PDy19W6hVa

First, some context: Title X is currently the only federal program dedicated specifically to providing affordable reproductive health care and birth control, and Planned Parenthood provides services to 40 percent of the more than 4 million Title X patients in the US.

Since the rule makes it illegal for doctors to provide abortion services or even refer a patient to abortion services while using Title X funding, providers such as Planned Parenthood would be forced to either give up millions of dollars in grants or deny Title X patients safe and necessary reproductive health care and information. This would make it more difficult for low-income patients not only to access abortion, but also to receive basic care and other family planning services. The rule matches the so-called gag rule the administration already has in place for foreign aid.

Planned Parenthood’s lawsuit, which they filed jointly with the American Medical Association (AMA) in a US District Court in Eugene, Oregon, on Tuesday, seeks to block the administration from implementing the rule. The suit warns that the rule would have “severe and irreparable public health consequences across the United States.”

In a statement about the lawsuit on Tuesday, AMA president Dr. Barbara L. McAneny added, “The Administration is putting physicians in an untenable situation, prohibiting us from having open, frank conversations with our patients about all their health care options — a violation of patients’ rights under the Code of Medical Ethics.”

As a relentless ally for physicians, we've filed a lawsuit to block the Administration's harmful #TitleX rule. We won't sit quietly while the government attempts to restrict open and free communication between patients and physicians. #LetDocsSpeak https://t.co/Npjs4wPye8 pic.twitter.com/WdK0z5Oz74

Planned Parenthood for America’s (PPFA) own statement about the lawsuit notes that the rule will have a disproportionate impact on people of color and rural communities. “Title X serves women and families with low incomes, the majority of whom are people of color, Hispanic, or Latino, and the gag rule will worsen existing racial, socioeconomic, and geographical health disparities,” PPFA president Dr. Leana Wen said on Tuesday. “Families that are struggling to make ends meet and people who live in rural areas must have the same access to full, unbiased information from their doctor as everyone else.”

Earlier this week, California Attorney General Xavier Becerra and a coalition of 20 other states announced similar lawsuits over the rule. And more lawsuits are still piling up. On Wednesday morning, the Center for Reproductive Rights also announced a suit challenging the rule.

Elizabeth King
Elizabeth King is a politics, history, and culture writer based in the Twin Cities. She is generally pretty cranky but still enjoys traveling, music from the early 2000's, and plotting the resistance. Feel free to say hi on Twitter at @ekingc or check out some of her work at www.elizabethcking.com.
Controversy
Womens Health
Controversy
More From Womens Health