Plucked Out of Poverty at Age 4, This Woman Wants to Bring Mental Health Care to Her Rural Indian Village 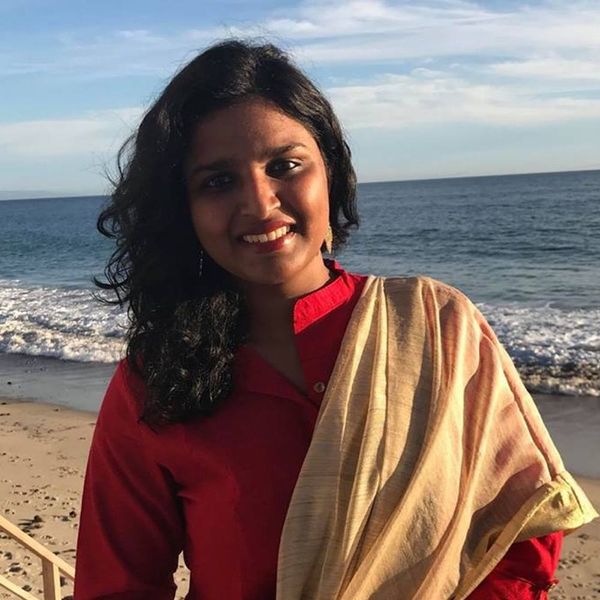 Be the Change looks at real-life projects and inspiration to make the world better.

Shanti Bhavan, a residential school in Southern India and subject of the award-winning Netflix documentary Daughters of Destiny, takes a unique approach to lifting families out of poverty: by demanding they dream big.

The school, which was founded in 1997, recruits students from the “untouchable” class at the bottom of India’s caste system. Its driving philosophy is that an educated daughter or son will improve the circumstances of their entire community. Already, the school reports that its graduates have gone on to attend and complete college. Some reportedly work at Fortune 500 companies and contribute 50 to 80 percent of their salaries to their families to cover housing costs, medical bills, education expenses for their siblings, and more.

Shilpa Raj, a Shanti Bhavan graduate and author of the memoir The Elephant Chaser’s Daughter, recently spoke with Brit + Co about how Shanti Bhavan changed her life — and how she plans to use her education to transform the way mental health is addressed in her community.

Brit + Co: How were you chosen for Shanti Bhavan?

Shilpa Raj: I was four years old. The school had just been founded and no one knew about it. A team from the school who knew the local dialect of the region’s villages would just randomly drive into villages, and on one fateful morning they happened to drive into my village, almost three hours away from the school. People [in the village] were curious about who these people were, who were so polished and well-dressed and speaking in English, and so naturally a crowd had gathered around them. They explained that they were from a school and they were looking for kids around the age of three-and-a-half and four, and that they would take them and educate them for free.

Immediately the news spread, and my father was insistent that I go in for the screening process. They based it off your ability to cope with an academic program, and had a few small tests [to determine that]: being able to respond to some simple questions and maintain eye contact. They were looking for children between a very specific age range because they believed in early intervention methods, and you had to fall into the bracket of being below the poverty line, and only one child from each family could be selected. I was four at the right time; my brother at the time was two, and my sister wasn’t even born yet. So it was just a matter of luck.

B+C: Why does the school only take one child per family?

SJ: They believe in reaching out and spreading the impact across as many families as possible. Even I’ve come to believe that even one empowered child is strong enough to carry the entire family forward.

B+C: How have you used your experience to help empower and carry your family?

SJ: There are two parts. Emotionally, I’ve been able to be a strong force of moral support for my siblings and my parents. And financially, from the book savings, I have been able to help them in small ways. I cover medical costs, because medical care is always an area they overlook and they postpone; they leave it up to God or a higher power to look after them, which logically doesn’t work for me. So, I immediately intervene when there are medical issues at home. I also help my grandparents by giving them money every month.

B+C: That’s a lot of responsibility for somebody who is a fairly young person.

SJ: I’m not the only one. Some of the people I studied with have paid for their siblings to go on to finish college. And [others] have built houses — kids who were living in slums have now built houses for their families. My friends have cleared off generational debt, which even I’ve done for my grandfather. He had a huge debt and in one go I cleared it for him. It’s been amazing for all of us to have this power to help.>

B+C: You’ve written your memoir, which has gotten a lot of really positive attention. And you’ve also completed a master’s degree?

SJ: Yes, I completed a master’s degree in psychological counseling. I’ve decided to dedicate my life to the field of mental health — I lost my own sister to suicide at the age of 14. Her death made me realize that she was just one among the many children who live their lives completely helpless to the larger forces of violence and trauma, and that’s just compounded by the role of poverty. So, I’ve finished a master’s and I’m pursuing a second master’s of philosophy in child and adolescent psychology.

B+C: Incredible. So, is your ultimate goal to become a counselor in the community that you’re from, to work with young people?

SJ: Yes, my goal is to open my own clinic and hopefully work with governmental organizations to help bring about policy change.

B+C: Over here in the US, issues of mental health and wellbeing are becoming more common subjects of conversation and concern. But there also seems to be a class component involved — it seems to be more of a conversation among educated or well-off people and less prioritized, and more stigmatized, among poorer people. Is that also the case in India?

SJ: Yes, here it’s the same. In my community, or at least in my own family, I have found that people often don’t have the language to express emotions. They have words like, “happy,” “sad,” and “angry,” but that’s it. So, they also don’t have the coping skills to manage their emotions.

Nowadays, I move around in middle- and upper-class society, back in college. We do talk a lot about mental health, and I’m very encouraged by the kind of exposure and awareness that’s being spread in India in the circles that I move in. But back at home, nobody even knows that you could go to a counselor, or the kinds of mental health care that’s out there.

B+C: And I would guess that trained counselors or clinicians may not have much interaction with communities like the one that you’re from, and might not necessarily know how to work with people who don’t have the familiarity with these mental health concepts. In starting a clinic there, you will fill a health care gap.

SJ: Yes, that is my eventual goal. All of my friends, my peers who I studied with in Shanti Bhavan, we met to celebrate the new year and we all were talking about how our own experiences have been quite similar but also quite different. Many of them now have careers in the corporate world. One thing that we do share in common is this deep desire to help others other than our own families. That sense of giving is so deeply engrained in us, because from a very young age we were told that we couldn’t be selfish and we had a duty to reach out to others the same way people had reached out to empower us and change our lives.

Want to help mental health awareness in your community? Check out this list of organizations compiled by the Substance Abuse and Mental Health Services Administration that can help you coordinate an event near you.

Kelli Korducki
Kelli is Brit + Co's Senior News Editor. Her interests include sensible footwear and glasses that take up 25 percent of her face.
Be the Change
Empowerment
Be the Change Education Empowering Girls Mental Health