9 Podcasts by and for Women That’ll Improve Your Life 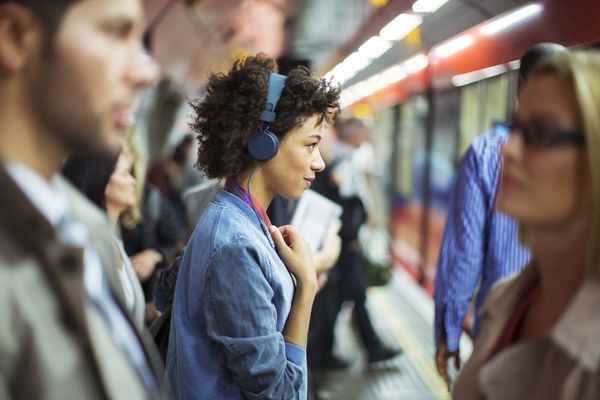 Like many fields of work, the world of podcasting is still a male-dominated one. There are, however, several popular podcasts today that happen to be hosted by female-identifying voices. And while it’s silly to think that podcasts by men can’t be enjoyed by women, and vice versa, we can’t help but feel happy to have these pods by and for women in our lives. From history to self-care to stories from the workplace, check out some of our favorites below.

No Man’s Land: Described as “a history podcast about women who were too bad for your textbooks,” No Man’s Land comes courtesy of the women-focused co-working and community space The Wing. In its first six episodes, it tells the deeper stories of rule-breaking, game-changing women that have been left out of popular history, such as Stephanie “Queenie” St. Clair, a Harlem gambling pioneer and Black community advocate; members of the Women’s Social Clubs, who fought for social reform; and Ida B. Wells, a journalist and activist who battled racism and sexism her whole life. It’s informative and inspiring, and it will remind you that there’s more to history and historical figures than we know.

Forever 35: What started as a podcast by writers Doree Shafrir and Kate Spencer — AKA “two friends who love to talk about serums” — has blossomed into a wide-reaching, supportive community of women who encourage each other to practice self-love in all its many forms. Each week, Shafrir and Spencer take listeners’ calls and speak with guests such as comedian Nicole Byer, Salt Fat Acid Heat author/host Samin Nosrat, or facialist Courtney Chiusano about everything from skincare suggestions and self-care rituals to how to end toxic friendships or have a better sex life. Make it part of your soothing weekly me-time.

Call Your Girlfriend: This podcast-turned-pop-culture-phenomenon was started by Tech LadyMafia founder Aminatou Sow and journalist Ann Friedman. Billed as a podcast for long-distance besties everywhere, it features the friends’ weekly cross-country catch-up calls about what TV they’re watching (currently Hulu teen comedy Pen15), the current state of US politics, professional insights, and, yup, their periods. They also frequently interview notable women, such as the feminist icon Gloria Steinem. Their conversations are a weekly comfort — much like convos with your own BFF.

Stuff Mom Never Told You: The How Stuff Works show has been running since 2009 (!), so there’s a healthy back-catalog of content to keep you company on that long commute, while you cook, when hit the treadmill, or all of the above. Each week, hosts Bridget Todd and Anney Reese take a research-based look at the challenges women face, while dishing practical insight and advice from their own diverse backgrounds to help women with their work conundrums, social responsibilities, personal lives, and more.

Women Rule: With the upcoming 2020 presidential election already looming large, now’s the perfect time to get into Politico‘s Women Rule podcast. Hosted by Politico Playbook writer Anna Palmer, the show not only tackles the inner workings of major political parties and processes, but also gets up close with professional women all over the country — including Air Force secretary Heather Wilson, NHL executive vice president Kim Davis, and actor-turned-activist Piper Perabo — to talk about how they got where they are.

Being Boss: If your path is more creative than executive, but you’d still like to learn all about the business tactics that make a passion into a successful entrepreneurial pursuit, Being Boss is the pod for you. Hosts Emily Thompson and Kathleen Shannon delve into everything from establishing processes and boundaries (often difficult for freelancers) to learning business strategies and more, all in the interest of helping you make money doing something you love.

The Broad Experience: If you sometimes (okay, all the time) feel like your experiences of what it’s like to be a woman in the workplace go unheard or misunderstood, The Broad Experience is here to comfort you. The long-running show, hosted by journalist Ashley Milne-Tyte, tackles discrimination, work-life balance, boardroom politics, and more, and does so in a concise and compelling way.

My Favorite Murder: One of the most popular current podcasts is a true crime and comedy hybrid that, yes, covers famous and lesser-known murder cases, but is also an empowering and educational study in how to stand up for yourself and help stomp out misogyny. Hosts Karen Kilgariff and Georgia Hardstark have become feminist heroes not only for respectfully honoring victims, but also by being honest and open advocates for mental health resources and speaking out against sexism in media, law enforcement, and more. Plus, did we mention they’re just straight-up hilarious? If you’re not already, it’s time to become a Murderino.

LadyGang: Keltie Knight, Jac Vanek, and Becca Tobin host a no-holds-barred Hollywood-focused podcast that takes a look at all things entertainment and what it’s really like to live life in the spotlight. We don’t believe in “guilty” pleasures, but if we did, this mimosa-soaked celebrity pod would be counted among them. Instead, we just consider it one of our weekly (no guilt) pleasures.

RELATED: 9 Podcasts That Will Be Your Next Obsession