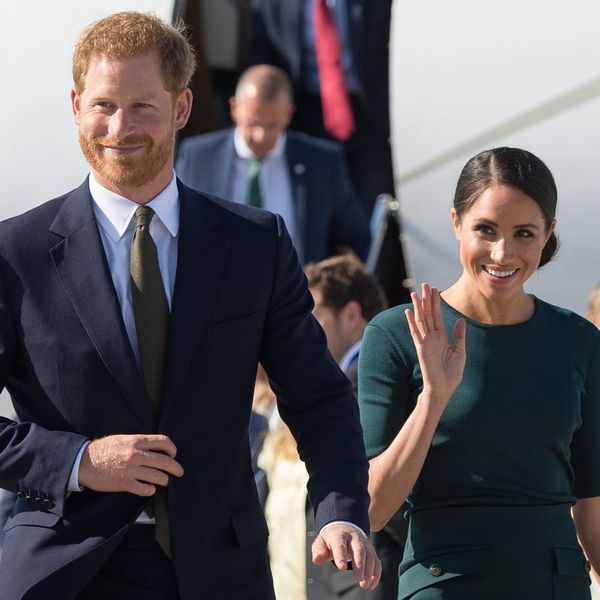 It’s been a busy week for Prince Harry and Meghan Markle. On Tuesday, July 10, just one day after joining the royal family for Prince Louis’ christening, and hours after attending an event to celebrate the 100th birthday of the Royal Air Force in London, the pair began their first official foreign visit as a married couple.

After a quick flight, the Duke and Duchess of Sussex arrived in Dublin, Ireland, and were greeted by the Prime Minister (or Taoiseach), Leo Varadkar. Markle wore a forest-green Givenchy dress, while Harry opted for a navy suit and a greenish-gray tie.

Kensington Palace said that the newlyweds will be “learning more about Ireland’s history and experiencing its rich culture, as well as meeting the people who are shaping the country’s future.”

The trip will include a number of activities, such as a Gaelic sports festival at Croke Park, the home of the Gaelic Athletic Association, and a summer garden party at the British Ambassador’s residence, where they will meet guests from Ireland’s arts, sports, military, and social enterprise sectors.

The royals will then visit Trinity College, where they’ll see the ninth century Book of Kells before heading to the Famine Memorial for a moment of reflection. From there, the couple will visit EPIC, the Irish Emigration Museum, as well as DogPatch Labs, a co-working space for technology startups, where they’ll take time to speak with female tech entrepreneurs.

It won’t be their last this year, though: The couple will head to Australia, Fiji, the Kingdom of Tonga, and New Zealand this fall, coinciding with the Invictus Games in Sydney from October 20 to 27.

If you were on a two-day tour of Ireland, what would be on your itinerary? Let us know @BritandCo!