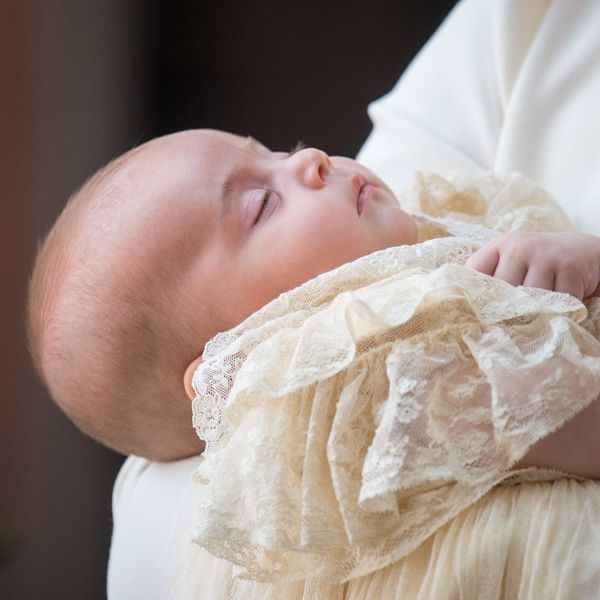 Prince Louis’ christening is taking place today, July 9, at the Chapel Royal at St. James’s Palace, with his parents, godparents, and other family members in attendance. To mark the special occasion, the royals are upholding traditions that have been around since before the queen herself was a baby.

At the ceremony, 11-week-old Prince Louis will wear a gown made by Angela Kelly, Queen Elizabeth II’s dressmaker. The gown is a replica of the original royal christening robe, which was made in 1841 for the christening of Queen Victoria’s eldest daughter, Victoria, Princess Royal. Every subsequent royal christening, until that of James, Viscount Severn, in 2008, featured the original gown of fine Honiton lace lined with white satin. James, Queen Elizabeth II’s youngest grandchild, was the first to wear the replica, which Her Majesty commissioned to preserve the original.

Like the royal christening robe, the baptismal Lily Font has been a feature of royal christenings since the birth of Victoria, Princess Royal. Commissioned by Queen Victoria and Prince Albert in 1840, the font — which was also used at the christenings of Prince William and Duchess Kate’s elder children, Prince George and Princess Charlotte — will be filled with water from the River Jordan.

The Tea and Cake Service

After the christening, the Duke and Duchess of Cambridge will host a private tea service at Clarence House, where guests will enjoy a slice of William and Kate’s wedding cake (yes, the same one from 2011). Designed by Fiona Cairns, the eight-tiered cake was made up of 17 individual fruit cakes decorated with cream, white icing, and nearly 900 individually iced flowers and leaves.

Does your family have any special traditions when a baby is born? Let us know @BritandCo!

Desiree O
Desirée O is a ‘Professional Bohemian’ who loves anything and everything related to the arts, entertainment, and pop culture. She ADORES being a ‘Newsy’ for Brit + Co, covering all of the latest tidbits of awesomeness that you want to read about. When she’s not writing, she’s either making messy art, going on long adventurous walks with her camera, or poking around over at bohemianizm (http://www.bohemianizm.com/). You can find out about Desirée O and her work at http://DesireeO.com/ or follow her on Twitter @DesireeO.
Royal Baby
Pop Culture
Royal Baby Royal Family
More From Pop Culture