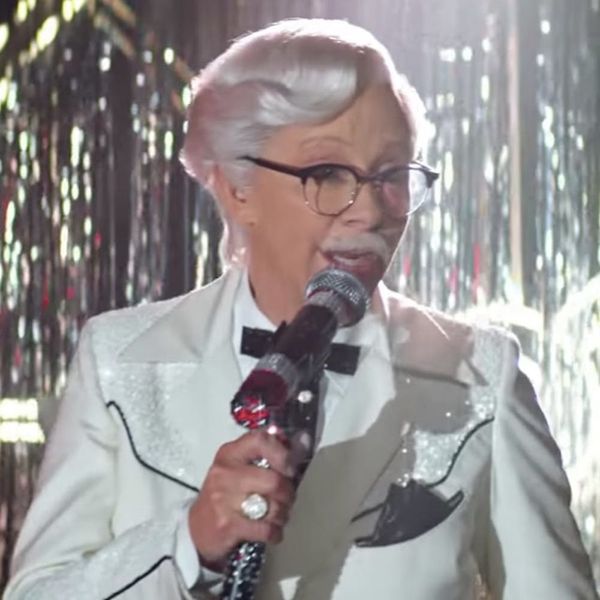 KFC certainly knows how to get people’s attention, whether they’re releasing their very own smartphones or selling KFC-branded bath bombs and edible nail polish. And let’s not forget when they introduced (…wait for it…) gravy cocktails! Now the chicken-lovin’ chain is buzzing yet again, this time because they just announced Reba McEntire as the first woman to be transformed into the iconic Colonel Sanders.

“I grew up with Kentucky Fried Chicken,” the country superstar said, according to Us Weekly. “It’s part of my story, and I’m so excited to now be part of theirs. I’ve held a lot of roles in my life — sort of like the Colonel himself — but this is certainly the most unique one yet.”

The 62-year-old may be the first lady to pop on the white wig, white goatee, and signature white suit, but she joins a long list of other celebrities who have played the restaurant’s founder, Colonel Harland Sanders, over the years. Billy Zane, Jim Gaffigan, Rob Lowe, Darrell Hammond, and Norm MacDonald have all stepped in to play the character, following in the footsteps of Randy Quaid, who voiced the Colonel in animated ads that ran from 1998 to 2001.

But now it’s Reba’s turn! And while fans will no doubt be thrilled to see her in the unexpected new role when the ad campaign launches on Sunday, she — or rather, the Colonel — is sure to note in the commercial, “Please ignore any likeness to famous country singers. I’m definitely not a woman.”

The campaign is to promote KFC’s new Smokey Mountain BBQ. “We’re super excited about this,” the chain’s senior corporate chef Bob Das told Us Weekly. “It’s kind of a combination of all the regions of BBQ. We call it the BBQ belt. We’re using the sweetness of Kansas City, the vinegar notes of the Carolinas, and then we’re using the Memphis dry rubs to bring out those textures and flavors to bring crunch.”

Check out the new KFC commercial below.

Nothing to see here, folks. Nope, nothin’ at all. Just the same old Colonel with a new flavor of fried chicken. pic.twitter.com/ju2omd07OC

What do you think about the fact that KFC picked Reba McEntire to be the new (and first woman to play) Colonel Sanders? Let us know @BritandCo!