5 Must-Download Apps This Week: Hack Into Your Neighbor’s Garden + More! 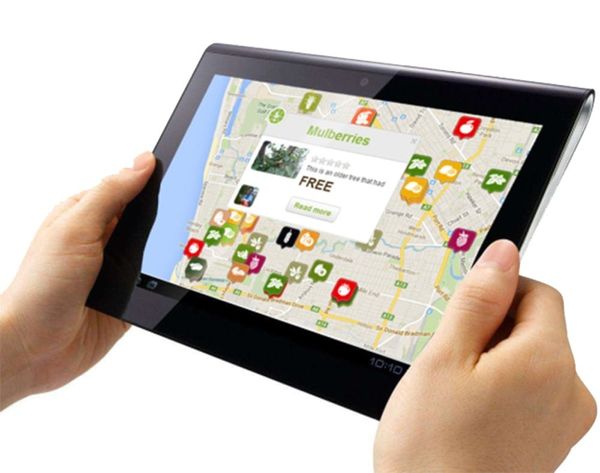 Hmm, is that our tummies rumbling or our phones getting a text? On this week’s edition of What’s App-ening, it’s probably a little bit of both. Today, we’re looking at some seasonal apps that are delicious, nutritious and will satisfy a craving or two. Thumbs up! Actually, thumbs down. To get them in the downloading position, duh.

1. Audibly: Jambox, got the summer impromptu dance party started with the latest upgrade for their mini music makers — if you and your friend bring yours together, a press of the button connects them for a surround sound experience. With this app, you can do the same thing with your + your friends’ phones. Download Audibly and sync up multiple devices to turn your smartphones into a mini Spotify-fronted orchestra. This one is best demonstrated with a show and tell, so we’re showing you the video of it in action above (+ telling you how cool it is). Pass this DL on to your friends for your next picnic-turned-rager!

Cost: Free for iOS (which, btw is a little cheaper than two Jamboxes)

2. RipeNearMe: Hands down the freshest app we picked all week, this lets you Airbnb the goodies in your garden (!!). To prove that there’s fresh food everywhere for everyone, this app lets you list what’s growing or ripe in your garden, microfarm, heck, even the apple tree in your yard. No need to raid Mr. McGregor’s carrot stash, Peter Rabbit, just log on to the site and find what’s local and delicious around you. An upcoming app will let you do it on the go, too, but for now this great idea is just a seedling. Help it grow by pledging your support, spreading the word and start scanning ripe, oft-organic, sometimes free produce for the pickin’ near you now.

Cost: Free to use and produce varies by listing!

3. DinnerTime: Once you have your fresh fruits and veggies, it’s time to eat! And if you just went through all the trouble of cooking up that well-balanced meal, the last thing you want to see is your fam wolfing down their noms with a side of smartphone. The DinnerTime app lets ‘rents set timeout times on kids’ phones during family dinner hour, bedtime or whenever. They can set gentle-yet-stern reminders to take a break, too. Kids, you might think this is soooo lame, we know, but take a tip from us: It’s all about compromise when it comes to pleasing the parents. And this is a good one, especially because there are way more restrictive apps out there that offer way more parental control options. Shh…

Cost: Free for Android and iOS

4. Wut: This week Facebook’s latest Snapchat takedown attempt Slingshot was here… and then it was gone. Which is funny considering the whole point of the disappearing messaging app is, well yeah, disappearing messages. (A little too ironic? Yeah, I really do think…) While you wait for its App Store reappearance, get the power of the ephemeral “what’s up?” with Wut. This super simple app isn’t just another snooze-y Snapchat ripoff, Wut actually does something (gasp!) different. Its standout feature is that it’s semi-anonymous, meaning any message you send will be pinged to the rest of your Facebook Friends who have the app downloaded, no name attached. Like Snapchat meets Whisper, but with emojis and tie dye backgrounds. Wut, you have our attention.

Cost: Free for iOS and coming soon on Android

5. Fixed: Dealing with your next (and not your first) parking ticket could be as easy as taking a picture. Fixed is a San Francisco-based (for now) app that can do just that, with a team of legal experts who will fight unfair or unclear parking tickets for you for only 25% of the cost of the ticket if you win. We wrote about Fixed way back when it was merely a twinkle in our iPhone, but in the last few months, the company has launched, banished the wait list in SF and just rolled out an update based on user requests.

Cost: Free to download for iOS, but visit their site to learn more about legal fees (psst, there’s no fee to contest the ticket)

Strawberries and green beans aren’t the only things in season right now — so are sweaty, shirt-discarding soccer, er, football players. We like to bring you five apps you should DL ASAP each week, but sometimes we just have to do a few more than five, and we couldn’t leave you without a World Cup app or two in your arsenal. Hope you can handle it!

FYI, Twitter reeeally wants you to Tweet about the World Cup. So much so that they launched a new timeline in their iOS app that lets you create a customizable profile so you can message “Gooooallll” and let your avatar tell the world just who you’re cheering on.

Brazil is probably great and all, but we are bummed that the time difference means that we’ll be at work for almost every game Monday through Friday. But surely your employer is totally okay with you propping up the ol iPad to get your game on at your desk (Right, Brit?! ;) Stream the first two rounds of games for free using the official Univision Deportes app.

What’s the best app you’ve downloaded recently? Spill it below!

Lisa Raphael
In her past professional lives, Lisa has served the masses as the Editorial Director at Brit + Co, Bieber Whisperer at J-14, Golden Girls Fan Club Prez at Lifetime and Talk Show Host Understudy to Katie Couric. Now, she's taking on the sports world at The Relish, teaching Hairography 101 in her spare time and will forever be trying to fill the hole Zayn Malik left in her heart.
Android Apps
Tech
Android Apps
More From Tech