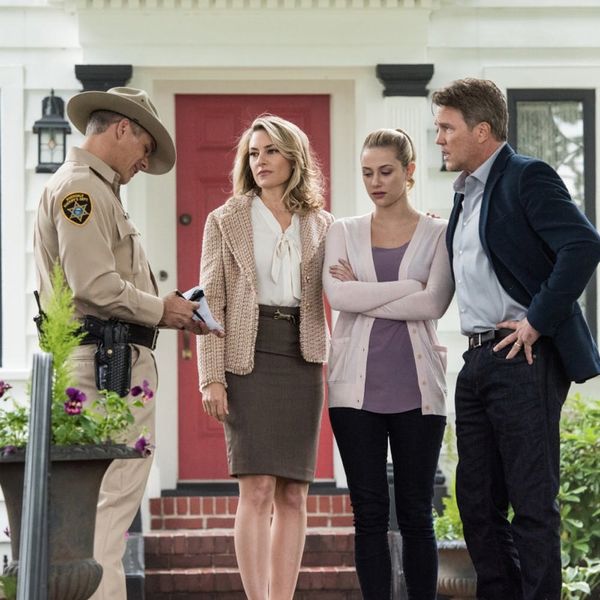 **Warning: This post contains spoilers, so if you haven’t watched the latest episode of Riverdale, stop reading!**

What’s going on this week in good ol’ Riverdale? Well…

It’s been a week since Jason’s body was found. Also, Miss Grundy is the best, basically. (#HotArchie says so, and he’s not talking about her cello playing.) It’s slightly awkward to see Archie and his dad talking with Miss Grundy when we know what his son has done, but then it gets even more awkward when she gets invited to dinner.

Jughead is peeved that Twilight Drive-In is closing, partially because nostalgia and partially because he’s gonna lose his job. I mean, Veronica’s right, in today’s age of Netflix and chill, the only people who go to drive-ins are “people who want to buy crack.” (Unrelated, but kind of related: I want Betty’s milkshake.) There’s a lot of stuff happening at Pops at the same time — Cheryl is eating with her friends and tries to insult Veronica’s mom (who knows how to handle spoiled brats), then Archie and Grundy walk in, because it’s Riverdale and where ELSE are you going to go to dinner? Betty takes Archie aside and asks if he’s “with” Grundy because she knows she was at the lake on July Fourth. Naturally, Veronica overhears, because nothing stays secret in Riverdale for long. But anyway, Betty’s mom comes by to break up the party, literally. Good ol’ Mrs. Cooper.

Still concerned, Betty looks up Grundy and then goes to interview her under the guise of doing a piece for the school paper. Grundy answers all her questions pretty easily, though Betty is thrown when she learns she did an independent study last year with Jason Blossom. It leads her to become even more suspicious, and so she does more research. Apparently, Grundy did exist once — as an old lady that died several years ago. All of her social media accounts were created a year ago, and there’s no record of her existence. Archie thinks she’s being too nosy, but later, while he’s watching movies with Grundy, he does ask her about her life, including why her parents named her “Geraldine.” Grundy just kisses him to shut him up, because why not?

Betty and Veronica break into Grundy’s car, where Betty finds a locked box with a Minnesota driver’s license belonging to Jennifer Gibson… and a gun. They confront Archie about Grundy, which leads Archie to go directly to Grundy and ask about what she’s hiding. Turns out she IS hiding, but not for the reason everyone thinks (AKA she killed Jason). She was apparently in an abusive relationship and so she got out, got divorced and changed her name. That doesn’t explain the gun, but hey, it’s Riverdale.

Betty’s still hesitant to trust Grundy even after Archie tells her the truth, but she’s got bigger things to worry about: Her mom was snooping around in her bedroom and found the gun she’d stashed. Her mom also went through her diary, which is a BIT invasive, dontcha think? Needless to say, when Betty comes home, mom is PISSED. More than usual.

Let the real adventures of B & V begin! #Riverdale pic.twitter.com/EtviQYGeMJ

And she’s on a mission. She interrupts Archie’s dad at the drive-in movie, and along with Betty, barges in on Archie and Grundy in the music room. For once, they’re not even doing anything bad! They’re just being sweet and adorable! But Betty’s mom goes crazy, and man, she really does hate Archie. Archie tries to shift the blame to himself, and Betty tells her mom if she doesn’t back down, she’ll sour the whole family name and tell the world how she broke into Grundy’s car and everything. Grundy speaks up and announces she’ll quit and leave town, much to the sadness of Archie.

Cheryl, meanwhile, is out in full sass. She sees Veronica’s mom having a chat with a “Southside Serpent” AKA part of the biker gang no one wants to get involved with, and takes a photo outside the diner, baiting Veronica with it. Veronica confronts her mom about the exchange, but her mom reminds her she grew up here and they weren’t always the “bad guys.” She was just being nice. Veronica buys this, at least, until she sees her mom sneaking off with another biker dude and looking skeevy while exchanging money. This time, when she asks her about what happened, Hermione is more direct, and tells her the truth: Her father hired the Serpents to help take the drive-in away, so that Lodge Industries would buy the land. Always a businessman, that Hiram Lodge! Veronica is so not morally okay with this, by the way.

Jughead visits multiple people in town, including the mayor and Archie’s father, and tries valiantly to save the drive-in, to no avail. Closing night at the drive-in is Rebel Without a Cause (Betty’s suggestion). Cheryl shows up to watch with Veronica and Kevin, and Kevin eventually leaves to get popcorn… only to run into a Serpent. Oops? But there’s more here than meets the eye, because Kevin is definitely making out with this guy. Everyone is so scandalous. (Also, how awesome was it to see Veronica shutting down those Southside Serpents? “What was it like before she got here? I honestly cannot remember.” Me neither.)

When Kevin gets home with his dad, they find their door open and everything in their home destroyed… including the wall of evidence. Archie is upset about Grundy, Betty tells her mom she’s not Polly and her mom doesn’t want them to keep secrets anymore. The good news? Archie and Betty are okay, even after the whole Grundy incident. And have we seen the last of Grundy? THAT remains to be seen…

And Jughead? Well, the whole reason why Jughead was so upset that the drive-in was closing (aside from the fact he was losing his job) was that it was his home. Now he doesn’t have a place to live because he’s on his own and doesn’t want anything to do with his dad who is… a Southside Serpent.