Transform Your Living Room into an Interactive Video Game 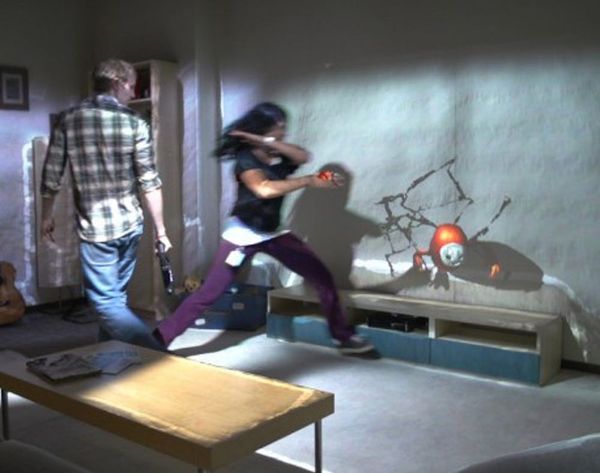 You’re a sucker for old school gaming consoles like Super Nintendo, Sega and, heck, maybe even the Atari. But the times, they are a changin’, friends, and the latest technology in the video game world might have you trading in your “vintage” devices for this seriously innovative system.

Meet Microsoft’s RoomAlive. In short: it transforms your living room into an interactive video game. With technology called Projection Mapping, RoomAlive can assess the entire room you’re playing in and create virtual images onto the walls and floors with a projector depth-camera unit. The player’s movement is then tracked with six Kinect sensors, giving them the ability to shoot, touch or interact with the digital objects that are being projected onto the room. Rad? SO rad. Players can tap objects with their body or for points, or shoot with a gun controller.

To show how the system can work, Microsoft created a video featuring the different environments and objects that can be created through RoomAlive. In one scenario, the living room was transformed into a jungle-like setting with a running river flowing through the floor. In another experience, a mole pops out in the corners of the room, waiting for the player to “whack” it. Of course, if you’re too lazy to move around, they’ve also created a game where you can control a virtual character with a standard game controller. And, in perhaps the coolest sample scenario, a user darts bombs and booby traps that pop up on the walls.

It sounds a bit complicated and fancy, but it’s actually really easy to install. All you have to do is set up the projector and cameras to your ceiling, and it’ll create the playing surface for you. Each camera can detect the walls and floors and auto-calibrate for the user.

Amazing as it sounds, there are a few drawbacks to the RoomAlive. Firstly, it’s still a prototype, and it’s likely you won’t be able to get your own for awhile. Secondly, it’ll probably be pricier than the average gaming console. According to Mashable, the HD projector could cost upwards of $600, which does not include the V1 Kinect, motor control and RoomAlive software package. They guesstimate it will run gamers approximately $1,000.

That said, it’s still a pretty exciting development in the gaming world. A Microsoft spokesperson told The Verge that while “there’s still lots to explore with RoomAlive as a gaming platform” they envision a future “where games can use physical objects as part of the game.” We can’t wait!

Are you stoked for RoomAlive? Would you buy one when they release it? Tell us!

Sara Tan
Sara Tan is a lifestyle writer and editor who is obsessed with all things fashion, food, and pop culture. She's originally from LA, but recently relocated to Oakland, CA. When she's not sitting behind her laptop, you can find her shopping sales, spinning at SoulCycle, or exploring her new city with her French Bulldog by her side.
Tech