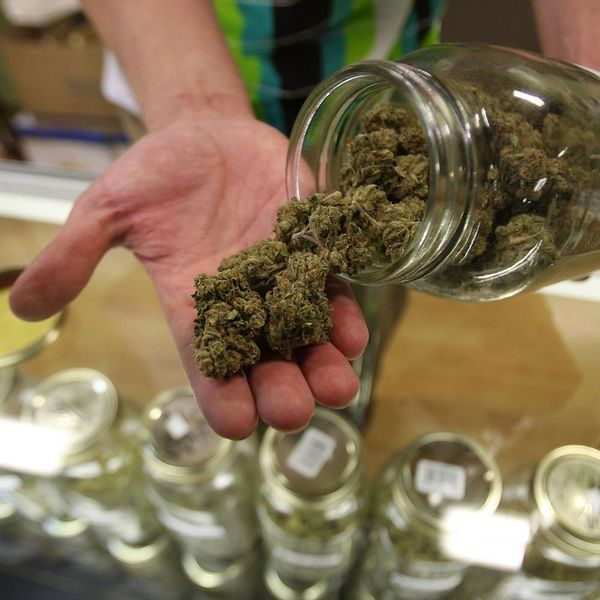 There’s no denying that there has been growing support for the legalization of marijuana in recent years. According to a Gallup poll from October 2017, 64 percent of Americans want to see weed legalized (including a majority of Republicans!). California became one of the first few states to legalize recreational marijuana on January 1, which was a cause for celebration among legalization advocates. Now there’s even more reason to get happy about weed in California: San Francisco is going to retroactively dismiss several thousand marijuana-related convictions.

San Francisco District Attorney George Gascón announced Wednesday that the city will review and re-sentence approximately 5,000 felony marijuana cases, and more than 3,000 misdemeanor cases that were decided before Proposition 64 became law on January 1. The DA’s office will review cases dating all the way back to 1975, clearing convictions for thousands of people.

The Los Angeles Times reports that other California cities may also decide to review and overturn convictions now that both recreational and medical marijuana are legal in the state, and the San Francisco DA is hoping other cities will follow suit. In his statement announcing the decision to clear thousands of cases, Gascón said his city is “taking the lead to undo the damage that this country’s disastrous, failed drug war has had on our nation and on communities of color in particular.”

The legalization of marijuana in California has been welcome to many who need marijuana to treat medical conditions, and also for those who like to toke up just for fun. But activists have consistently voiced concerns over the fact that, despite progress away from criminalization, hundreds of thousands of Californians have been arrested on marijuana charges in recent years.

According to a 2016 report from the Drug Policy Alliance, more than half a million people in the state were arrested for marijuana crimes between 2005 and 2016. And though incarcerations for marijuana-related charges have been on the decline in California, approximately 6,537 people were incarcerated in the state in 2015 alone, according to a report from Drug Policy Action.

In California and nationwide, the criminalization of weed has disproportionately impacted people of color. Drug Policy Alliance’s 2016 report on marijuana arrests and convictions in California highlighted the stark racial bias in marijuana cases: white, black, and Latino people all use weed at basically the same rates, but police in California were found to arrest black people at 3.5 times the rate of white people for marijuana crimes in 2015. Further, the report found that California police were increasing arrests of Latinos for marijuana crimes between 2006 and 2015.

A 2013 report from the ACLU found similar patterns nationwide. According to the ACLU, Black people are nearly four times as likely as white people to be arrested for marijuana possession, even though white and Black people use marijuana at similar rates at the national level as well.

The city of San Francisco’s decision to clear felony and misdemeanor charges for thousands of Californians is a significant step in the right direction. As District Attorney Gascón said in his statement Wednesday, “A criminal conviction can be a barrier to employment, housing, and other benefits.”

With their convictions cleared, people who have been carrying around a charge on their criminal record—possibly for decades—will now hopefully have more access to basic necessities like work and housing.

Still, there’s certainly room to take things further. Thousands of Californians outside of San Francisco will remain incarcerated for marijuana-related convictions, even though the drug is now legal for both medical and recreational use in their state.

Some legislators have been pushing to free people jailed for marijuana charges at the national level, even though the Trump administration has dedicated itself to rolling back progressive drug reforms. Last year New Jersey senator Cory Booker introduced legislation that would de-schedule marijuana (which is currently included in the same legal category as heroin), and to free incarcerated people who are serving time for marijuana possession and trafficking charges.

Bills like these are a serious long-shot under the Trump administration, but cities in California have a chance to at least go as far as clearing marijuana charges. San Francisco is demonstrating cities can take these matters into their own hands in the absence of state or federal-level policies that clear marijuana charges, and hopefully other cities will soon do the same.

What do you think about San Francisco’s decision to clear marijuana charges? Tell us on Twitter @BritandCo.