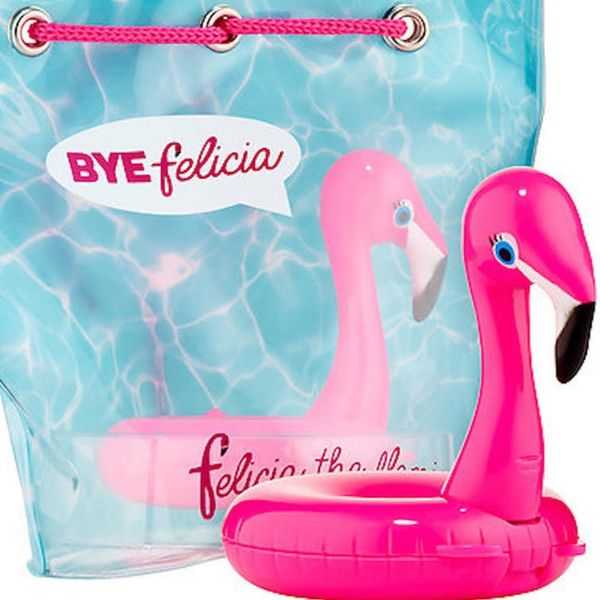 Sephora teamed up with newcomer beauty brand Taste Beauty to launch a shimmery pink lip balm packaged in a flamingo pool floatie-shaped container. The strawberry-scented gloss costs $10 and comes with a reusable mini beach bag. Everything sounds so good, so far, right?

The lip gloss is called “Bye Felicia.” Y’know like the meme from the movie Friday that mysteriously resurfaced four years ago, 18 years after the movie’s debut?

Yeah, that one, based off of a scene where Ice Cube dismisses a woman named Felisha who asks his friend to borrow his car and then a joint.

If it sounds like a weird thing to base a lipgloss off of, Taste Beauty’s managing partner Alex Fogelson said the brand wanted to “collaborate in a really fun, pop-culture-inspired fun and young item.” Welp, it certainly is adorable, and yes, it’s definitely pop-culture inspired. So mission accomplished, we suppose.

Twitter is pretty confused over the whole thing however:

Like wtf does a "bye Felicia" lip balm even mean?

What does bye Felicia have to do with lip balm or flamingos anyway??

. @Sephora don't do this with the Bye Felicia lip balm. Felicia didn't have on makeup at all. She smelled pretty bad too if I remember.

or maybe they created a mf lip balm and decided to name it bye felicia because they mf can. 🙄

Happy 4/20! Celebrate (and Chill Out) With These CBD Products

These Are the Best Everyday Face Sunscreens of 2019